Status
Not open for further replies.

As a continuation of the 2019 Google Algorithm Updates thread, we get our first action of the new year.

January 7, 2020
There's a "possible" update going on. I always say possible because I try to report on updates as early as possible and sometimes there's false positives. In this case, about 50% of the SERP weather forecast trackers show an update, about 20% show a very slight bump, and the other 30% don't show anything. Here's a sampling:

Bill Lambert is still rustling jimmies but his haters are quickly either learning to shut up or joining his side as the coincidences of his predictions continue to mount up to a mathematical impossibility.

Anybody seeing anything yet? It seems to have kicked off today so there probably won't be decent bird's eye data yet, but maybe you're seeing some rankings fluctuate in your tracker?

Ryuzaki said:
Anybody seeing anything yet?
Click to expand...

Yes, a few keywords took first position for the first time in a year, but not much going on. For whatever reason, this so far only impacted top 3-5 positions for me.

Yes. Got a nice boost in organic traffic from my site hit by the November update. Not quite back to where it was, but I noticed a boost yesterday and today so far the analytics data show even more than yesterday, so hopefully this trend keeps going.

Seems as though things are still moving but I may have had one site very wiped out. Hoping this is one of those 48 hour things.

Way too early to say but on the keywords affected for this site its a shift in intent from guides to either ecommerce or forums.

Edit: I forgot to mention the above was for mobile - celebrities, desktop is doing pretty well for YouTube, odd.

One of my site's going haywire lately.

I have stats changing throughout the course of 1 day but i'm seeing a see-sawing between 1st and 6th place. It's not normal either how it's going on.

It's not the backlinks. I hired somebody to speed up the site and make it top loading speed, along with check for errors.

I did make some changes to the home page, adding more inbound links though just before all of this. I took one of those links off and I saw an increase of stats for a few keywords.... nothing more....

I'm confused but I know it's not permanent.

If you're not in Google News, you're not maximizing. Limited time: 5% discount for any client paying with crypto coins

@EyesExist Some strange stuff happened lately. Lots of affiliate sites lost positions. Check the bhw topic and see if it's something similar. 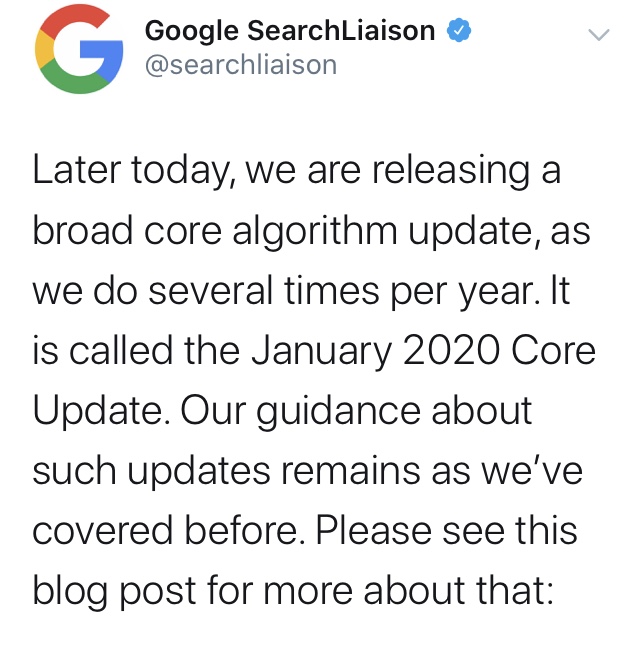 I'm seeing all sorts of wack sh*t. The site: operator is basically useless. For the most part, pages are being deindexed while GSC is saying they are in the index.

One of my articles was completely deindexed, tried submitting it for indexing via GSC, it appeared on its original position for 30 minutes or so and it's gone again...wtf?
Click to expand...

To anyone new reading this thread: don't make any drastic changes until at least 3 weeks after a major Google update. It takes a longggg time for the dust to settle. Be patient and don't overreact.

Frankly, I stopped caring about Google updates a while ago. Worrying about them causes unnecessary stress. You can't really adjust for them. Just accept it happened and keep on keepin' on.

I'm pretty sure after recent updates, (started in Nov), Google is now penalizing expired domains (at least 301 method), curious to hear anyone else's thoughts or experience on this?

@Jeffbowdoin, I removed some 301's from another site of mine last year in anticipation for something like that coming down the pipeline but at the same time it's a completely legit way to do mergers and acquisitions so... I'd say if you're on target with relevancy it's probably not an issue.

Regarding using them to build sites in a non-301 fashion, here's one I tossed up in November I think:

It's doing just fine so far and seems un-phased by this recent update.

My main project seems to have had zero boosts or drops. I'm assuming the update is still rolling out or at least cascading across data centers and propagating out through the algorithms. I'm not exaggerating that I've seen zero effects. It's business as usual.

​
I'd much rather see no effect than a negative one, so I'm crossing my fingers for now and keeping my head down and working. There's no time to get anxious...

I don't think this is out of the question at all.


Jeffbowdoin said:
1. Have you seen issues with expired domains with 301 to another domain?
Click to expand...

I could provide an affirmative on this one here. It was an M&A, but very little content was migrated; it was basically for links, exclusively.
"It's all a game. It's just numbers. Break the high score." - Tavin

A little difficult to be sure because of bouncing, but it looks like I could be recovering from last update, at least partially.

Ryuzaki said:
it's a completely legit way to do mergers and acquisitions
Click to expand...


Ryuzaki said:
I'm assuming the update is still rolling out or at least cascading across data centers and propagating out through the algorithms
Click to expand...

Yeah that could be the case for sure.

Philosophizing a bit here, but I also wonder if google may have its algo set to trigger on something like a normal distribution curve. In the sense that criteria that may harm a site only activates on X% of websites. Over the years I've seen plenty of discrepancies - something done on site A, appears to hurt site A, but on site B, it doesn’t appear to be harming it at all. Things that can harm a site seem random at times.

I always think of things that I would do if I were to create an algo, and that’s probably one thing I would do to prevent people from easily figuring out how it ticks.

I’d do the same with the implementation of updates, slow roll outs to not only test on a smaller scale, but to make it harder to uncover what the algo is doing. So maybe that's a part of it, who knows.

In either case, it does seem like it's getting more difficult to understand what the updates are about, and that’s, I think, by design.


Ryuzaki said:
My main project seems to have had zero boosts or drops.
Click to expand...


Ryuzaki said:
here's one I tossed up in November
Click to expand...

That's great! Yeah so it seems non 301 exp are still fine, which is what I've seen as well. (Hopefully that doesn't change)

Thanks for the input guys. This gives more insight into what I was seeing: Seems like expired 301 redirect (to another domain) seems to be hit, whereas expired original domain (non 301) seems to be unaffected.

Jeffbowdoin said:
That’s good! Curious, is this a 301 expired or non 301 expired? Or neither?
Click to expand...

Sorry, I didn't connect the dots in my post. It's a site that had several 301's aimed at it that I removed. I saw a drop in rankings after doing it so I know they were working, but I did it to have this site as clean as possible. It's holding completely steady so far. I can't add anything to the "301's have taken a hit" concern other than I figured that would be coming eventually and tried to get ahead of it.

Ryuzaki said:
I saw a drop in rankings after doing it so I know they were working, but I did it to have this site as clean as possible. It's holding completely steady so far.
Click to expand...

Gotcha, that makes complete sense now. Thanks for the clarification. You had good foresight to do that.

I thought my earnings had dropped a bit. I checked rankings now, and can see that my main site dropped down 2-3 positions on every keyword.

Since December the site has been in position #0 and #1. Really killing it. But after the latest update I got shoved down.

The site is one year old. Health niche. Has a big 301 redirect to it. The two sites that climbed above me on every keyword, has a much richer link profile.

Jeffbowdoin said:
I'm pretty sure after recent updates, (started in Nov), Google is now penalizing expired domains (at least 301 method), curious to hear anyone else's thoughts or experience on this?

I haven't had any issues with sites using 301s, both niche relevant and irrelevant.

No one seems to be talking about this latest Jan 2020 major update much?

After my post above both trackers started showing higher rankings and the increased traffic levels remained.

Today my trackers are showing marked decreases (drops back down to previous levels) but traffic is still up.

I guess we need to wait until next week for things to settle down but I am happy with this increased traffic for sure.

I've been looking at my site. Nothing is really making sense. My rank isn't even consistent through a full 24 hours. I'm just ignoring it for now and continuing to focus on building new links.

I feel like Google's testing and testing but don't have the situation figured out themself yet OR theya re developing a new system that will keep ranks fluxing throughout day based on user habits and who's on-line at what times............some work that would make it 'next level' to really focus on SEO.

If you're not in Google News, you're not maximizing. Limited time: 5% discount for any client paying with crypto coins

Status
Not open for further replies.