Let's say you write a blog post with a roundup of authors, the purpose of the post is to get every single one of those roundup authors to spread the word to their audience about it, ego stroking them. However the reality is maybe 20% will tweet about it or do a retweet. Less than 1% will send it out to their own newsletter or other channels - I mean you can entice them to do that, and if they do wonderful. But to gain some traction you should target their audience on the platforms they are active on.

I'm going to use WordAgent's recent RoundUp as an example: 45 SEO Experts Share Their Most Effective Content Optimization Strategy

There are 45 individuals there, they each have an audience from big to small. The good news is WordAgents is going to rank for the individual authors names which brings in long term traffic. They will also rank within the search results for the authors' brands as well - again long term search traffic.

But we are here for the social traffic. My go to platform at the moment are Reddit, Twitter, and Linkedin.

Linkedin Has nearly 100% content visible to your audience, so since I got 700+ connections, the ones that are active on the platform will no doubt see my content within the week, usually anything I post. So that's what Tavin calls an Exposure Engine. What I would do is the GaryVee Content Model where I create 45 different images content pieces, one of each author, and post them throughout the next 3-4 weeks daily, to the platform with a link to the original. Example: 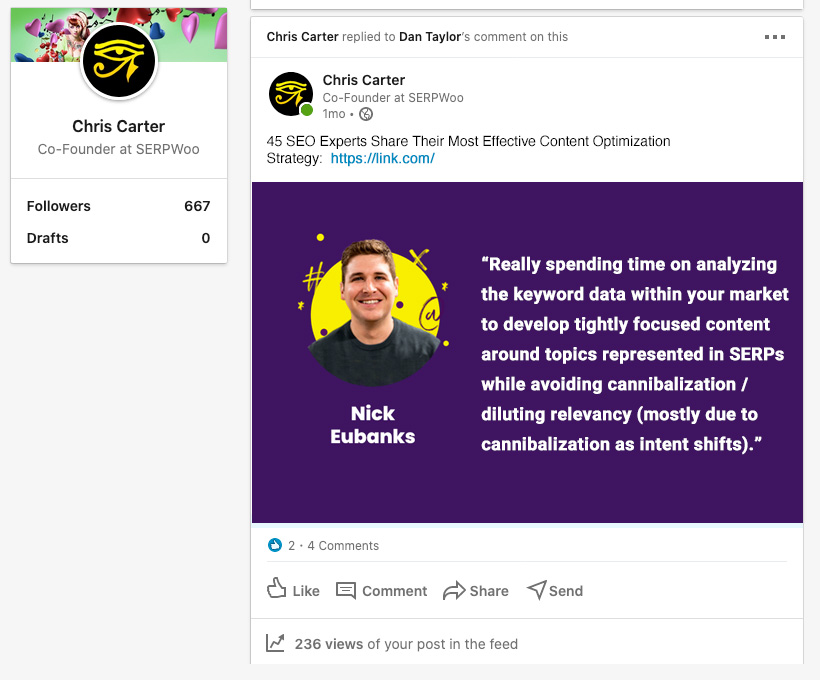 That takes care of Linkedin for the next 3-4 weeks. Use something like Buffer.com to schedule all this.

Once I figure out LinkedIn's Ad Platform I'll be back.

Next I'd go to Twitter and use the same strategy to post content within my twitter feed. BUT I take it a step further with this, cause within Twitter you can create Advertisement campaigns targeting followers of specific users. So let's say we want to get in front of Eubanks' audience, I know he is connected with the following individuals' audience: @nick_eubanks (his main), @IanHowells (co-founder of TTT), @matthewbarby (co-founder of TTT), @TTTSEOCommunity, and @iftfagency.

After the tweets go out for each author I can create a AD campaign that targets his audience and extended audience so they see Nick's face on a blogpost with his quote from it (visually think the same from the above Linkedin example).

So if Nick didn't necessary retweet, I'm still using his face to get in front of his audience, and since it's literally his followers and audience they are more likely to click through.

Gathering up his audience on twitter within the USA, UK, Ireland, Australia, New Zealand, and Canada across the brands he's associated with comes to 14,000 to 17,100 twitter users that can see WordAgent's AD with his face on it for the recent blog post they featured him in: 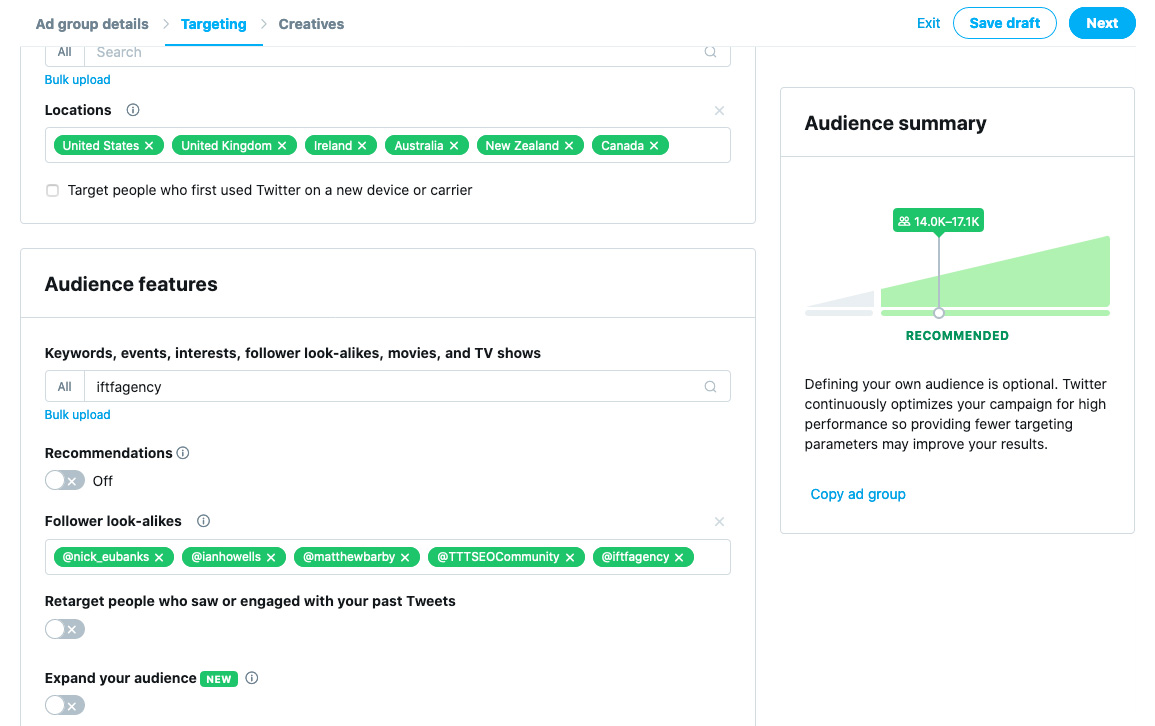 Now depending on what I'm willing to spend on promotion clicks can be from $0.70 to $3 for the exposure.

But more importantly if they don't click they'll see the WordAgent brand associated within his circle. Obviously there should have been some content about WordAgents within the image, but I'm doing this post free hand.

Do you guys understand how insane it was to get your customers to like you on Facebook, twitter, and these other platforms when they were pushing you to?

Now ANY Competitor can literally target YOUR CUSTOMERS on each platform and do comparative posts like "SERPWoo versus SERPBook". At SW we launched dashboards that compete against SERPBook's ViewKey, IF SERPBook's audience is on Twitter, all I need to do is target @serpbook's followers and the AD will follow them around Twitter all day. 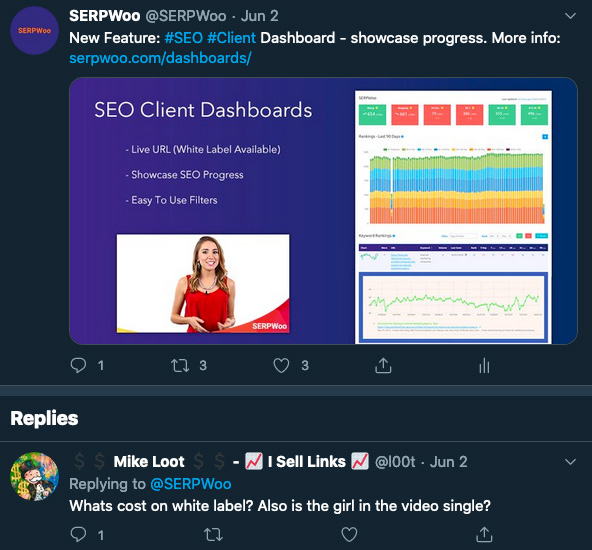 And this is critical about Branding, If they don't click I don't pay anything, but I'm still exposing my brand in front of their audience and doing a comparison of a major feature they have. 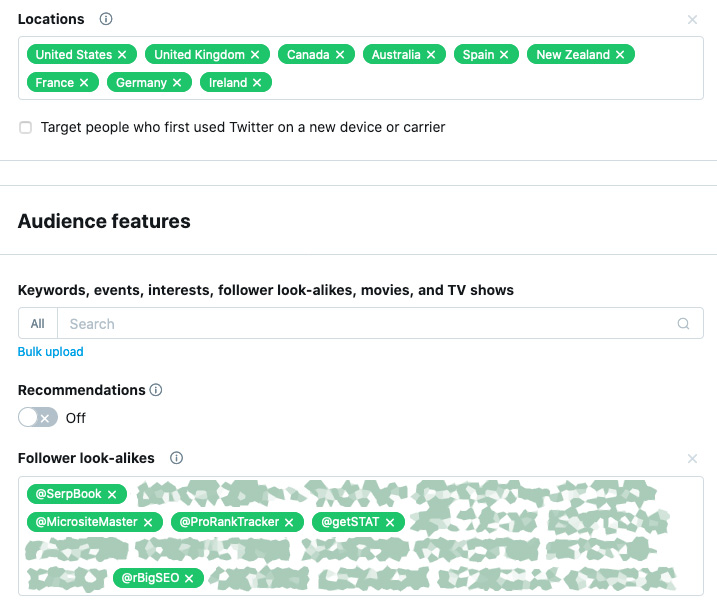 So now some 13000+ times my brand was in front of SERPBook's audience and 260+ people have interacted with it:

Now imagine I do this for every single major feature against every competitor - my brand is getting exposed in front of their audience and I'm literally only paying when someone clicks.

Depending on the audience For Eubanks and the other 44, I'm probably going to group some that have a smaller audience and do 3-4 people in a single image. For the authors with Eubanks' type of following I'm going to do a single image with his face and the quote.

45 users - putting $200-1000 spend shouldn't be a problem if the exposure is worth it. That obviously depends on your own ROI on visitors coming to your site.

You can do this within your own industry and niche without a problem - haunt your competitors.

For Reddit I'm just trolling some sub-reddits that know about me with ADs, so I would do the same with The 45 blog post round up, simple GaryVee slice it up, group who I can and post it on sub-reddits that make sense.

I can literally take the 45 slides of each individual author and create a slideshow, then target any of the author's YouTube channel subscribers if they've got YouTube channels setup for them or their brands.

The goal here is to get in front of people that might not necessary lift a finger to aid you, but their audience is active on certain platforms which you can leverage.

These social media companies have literally opened up Pandora's box to hyper-targeting your competitors' audience at a level most don't realize. Like right now there is no way to really know, other than me telling you, that I'm targeting SERPBook and some other competitor's followers on Twitter, yet targeted traffic is coming in daily. 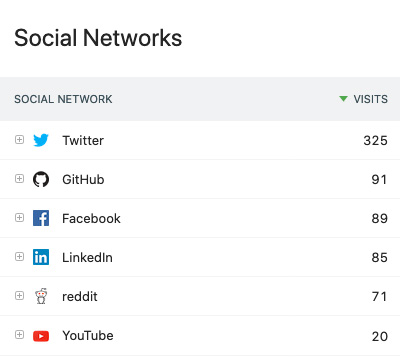 So if you got a juicy piece of content, a comparison versus a competitor, or something newsworthy content piece, you can follow your competitors' audience around exposing your brand to them giving the audience an alternative. In the WordAgent's example they can use every single person's face within promotional images on all major platforms continuing to get exposure for days, weeks, and months afterwards.

One thing I always stress is taking the amount of time it takes you to create a piece of content then multiply that time by 2-3 and use that time to promote the content piece. So if you a content piece took you an hour to make, you should spend 2-3 hours promoting it.

Social media ADs are some of the easier ways to promote it straight up. Other ways involve you "making the rounds" to platforms to leak traffic to places your audience interacts with. It's not a coincidence I'm growing my LinkedIn numbers - with near 100% visibility to my connections any content piece I send gets exposure.

Also there is a reason the WickedFires, BlackHatWorld, WarriorForums, and other places still generate traffic if you take the time to write valuable "meat on the bone" content (obviously make sure you've got a signature that send traffic your way). When you set yourself apart from the crowd, you are setting yourself up for future traffic. But writing "meat on the bone" content means nothing without telling people about it. BUT all that is beyond social media, a lesson for another day.

I can't possibly agree more on the not being on or investing in platforms that will turn around and sell your audience to who ever writes them a check.

Yeah claiming everything, and posting everywhere, can get you started with a bang but the downside is all of the clones can come along and grab your audience as soon as their angel investor sugar daddies check clears.

A key part of our growth has been hitting customer demographics that are outside of our competitors content marketing and tracking universes.


Since we're taking shots at big platforms another big item I wanted to point out is that almost none of the big social and advertising platforms paid options are remotely close to being what anyone could call a fair marketplace.

You can't win an auction vs someone who gets 50% of their spend credited back to them at the end of the month. Or 20 free 500$ vouchers every time they send a rep to some corporate backed "invite only conference".

All these platforms have insider programs with rebates, special new feature access, and ad credits for the chosen. If you aint in the club you're just going to get abused for participating. Take your ball and go home.
Last edited: Jun 19, 2020

The Artist Formerly Known as God of SEO

I've been spending a lot of my time on my Twitter marketing in the last few months, I'm not nearly as proficient in the others (yet) but I'm getting a hefty amount of clicks and generating around $5,000 - $10,000/mo in profit off that platform alone. 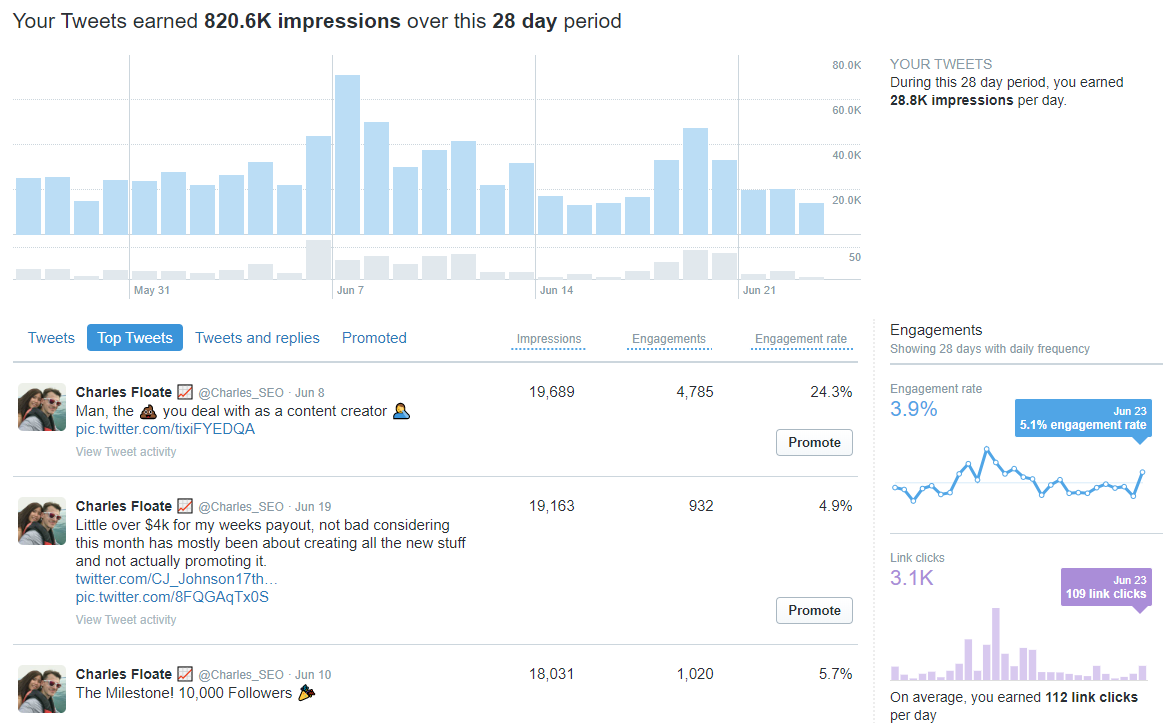 I've actually been on vacation (first time to travel in 2020) internally in Thailand for the last 10 days so my statistics are actually down in comparison to usual too.

Twitter is an insanely powerful platform if you can spend some time on it every day and focus on a key few areas of skill:

Doing my hashtag research for Instagram I found this delightful gem at BHW: Everyone's been lying to you about hashtags

Step 2. Type in a very broad keyword related to your niche.

Step 5. Add the hashtags into a note pad and remove any that aren't niche specific enough. Sometimes hashtags will be used for two completely different niches. Remove these.

Step 6. Copy the hashtags, click the back arrow in your browser and paste them into the search bar.

Step 7. Click "Auto" and move the slide from 30 to infinity.

Step 8. Rinse and repeat until you have a ton of hash tags.

Step 9. Click copy mode and copy all of the hash tags.

Step 10. Special paste values only the hashtags into the "A" column of Google docs named hashtags.

Step 12. Go through several hash tags with different popularity levels. Go to instagram and put them into the search bar. Take a look at the top 6 photos for every hash tag. How many likes/engagements do you need in order to rank for that hashtag?

Step 13. Only use hashtags that give you a chance of reaching top 6 posts.

Ironically it's using the same avalanche technique of defeating an algorithm by using steps which I employ for SEO.

CCarter said:
Ironically it's using the same avalanche technique of defeating an algorithm by using steps which I employ for SEO.
Click to expand...

Have you written about this SEO technique yet?

bopeep said:
Have you written about this SEO technique yet?
Click to expand...

Someone doing a GREAT example of created content that's got meat on the bone for their audience is DigitalSargeant. She doesn't get the most views cause she's starting out but the fact that she is consistent with the content, gets in front of the camera, and is able to give real "meat on the bone" advice even some DIY style means she is creating an authority within the small business digital marketing ecosphere.

Here she talks about Buyer Persona, something I go into detail about within the Day 3 - Market Research of the Digital Strategy Crash Course: