Long story short, when I around 20 years old and the Playstation 2 was out, I sold it and all of my games and said I'd skip the next generation and hop back in when the PS4 came out. The goal was to not be distracted and to have a "technology shock" when I got back into it, with a big leap in graphics.

Time came and went and I ended up using Mac computers so I couldn't even really game there, if you're aware of the Mac gaming landscape. Finally with all of the talk of the PS5 and Xbox Series X coming this holiday season, I started looking into them versus building a gaming PC.

What really settled it for me was true backwards compatibility and not paying $60 for old console games I can get for $5 on Steam. So I set about studying the current generation of parts for PC's. After a couple weeks, I understood the lay of the land and put together a build on PCPartsPicker. Unfortunately, they under-estimated the cost by 25%.

Here's what I ended up paying. I know I overpaid for some parts. Like there seems to be a global power supply shortage right now, and GPU prices inflated some degree. 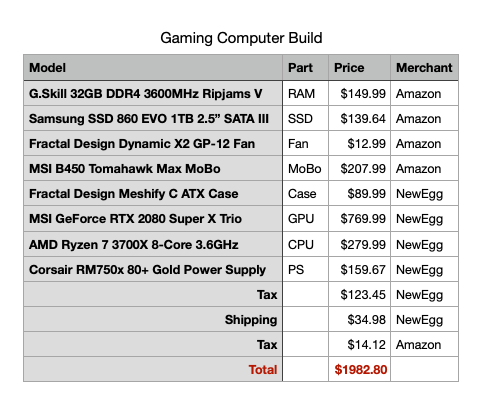 You can tag on another $100 for a USB stick to create a Windows 10 boot drive, some RCA cables, USB extension cables, two USB hubs, an HDMI cable, etc. 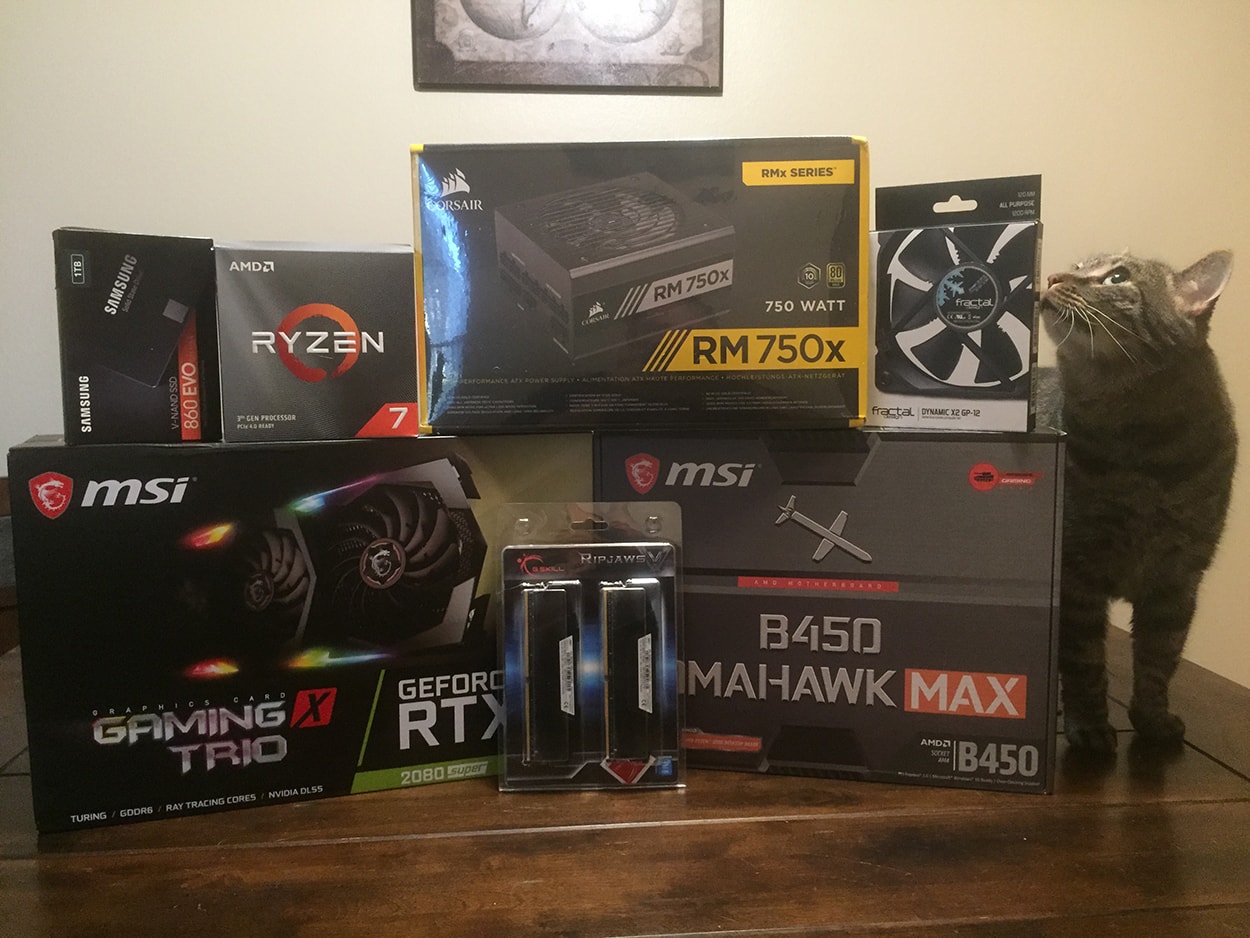 I did the whole thing of watching benchmarks, etc. My giant 3840 x 1600p monitor is locked in at 60 fps so I didn't need to worry about doing 144Hz, and I'd rather have the size over the refresh rate at a smaller resolution.

I also looked at the sweet spot between spending extra while getting diminishing returns. I think I dialed it in nicely. I went without some things like the new m.2 SSD's with higher bandwidth because I'd have to then upgrade the motherboard, and games don't benefit from that anyways, it's mainly GPU RAM that makes the difference in that regard.

PCPartsPicker made it easy to see what was compatible or not, though I didn't blindly trust it without verifying.

It's been a nightmare of trying to make a boot drive on a Mac (I ended up using a friend's Windows computer to use the Media Creation Tool). The HDMI cable gave me a scare that it wouldn't support 60fps at this resolution (plugging it into the 2nd port instead of first on the monitor fixed it up).

I'll have it all set up where my Mac Pro and this gaming computer can share the same speakers, mouse and keyboard, same monitor, etc. There will be zero annoyance in popping in back and forth between the two.

Anyways, here's some of the few pics I remembered to take as I was putting it together: 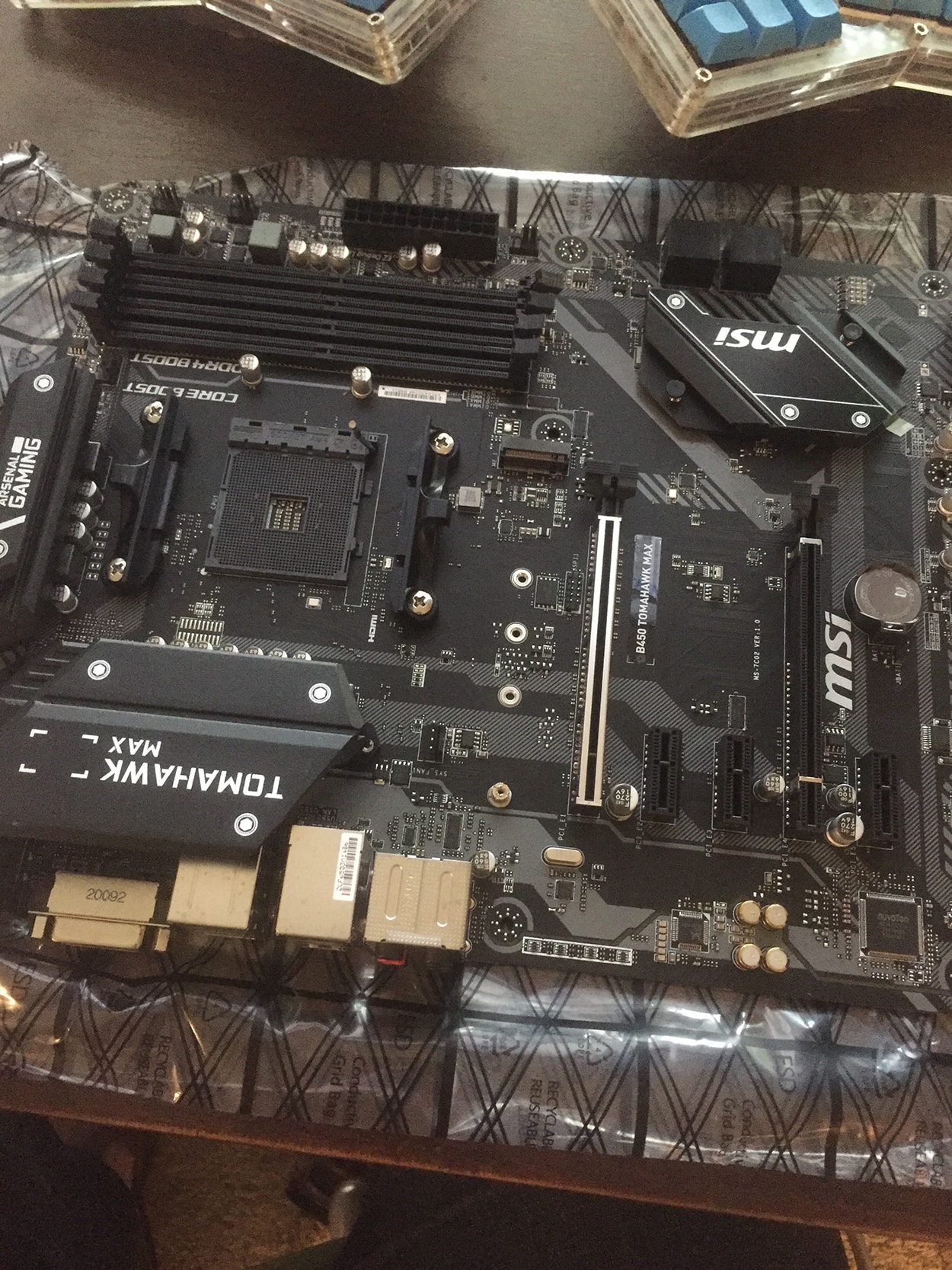 ​
That's the motherboard before I started slapping in the CPU, CPU cooler, RAM, and GPU. All of that was easy, but plugging in all the cables around the edges of the motherboard was pretty wild. There were very little instructions that came with any of this stuff, which I found strange. If there was any, it was the most surface level crap. 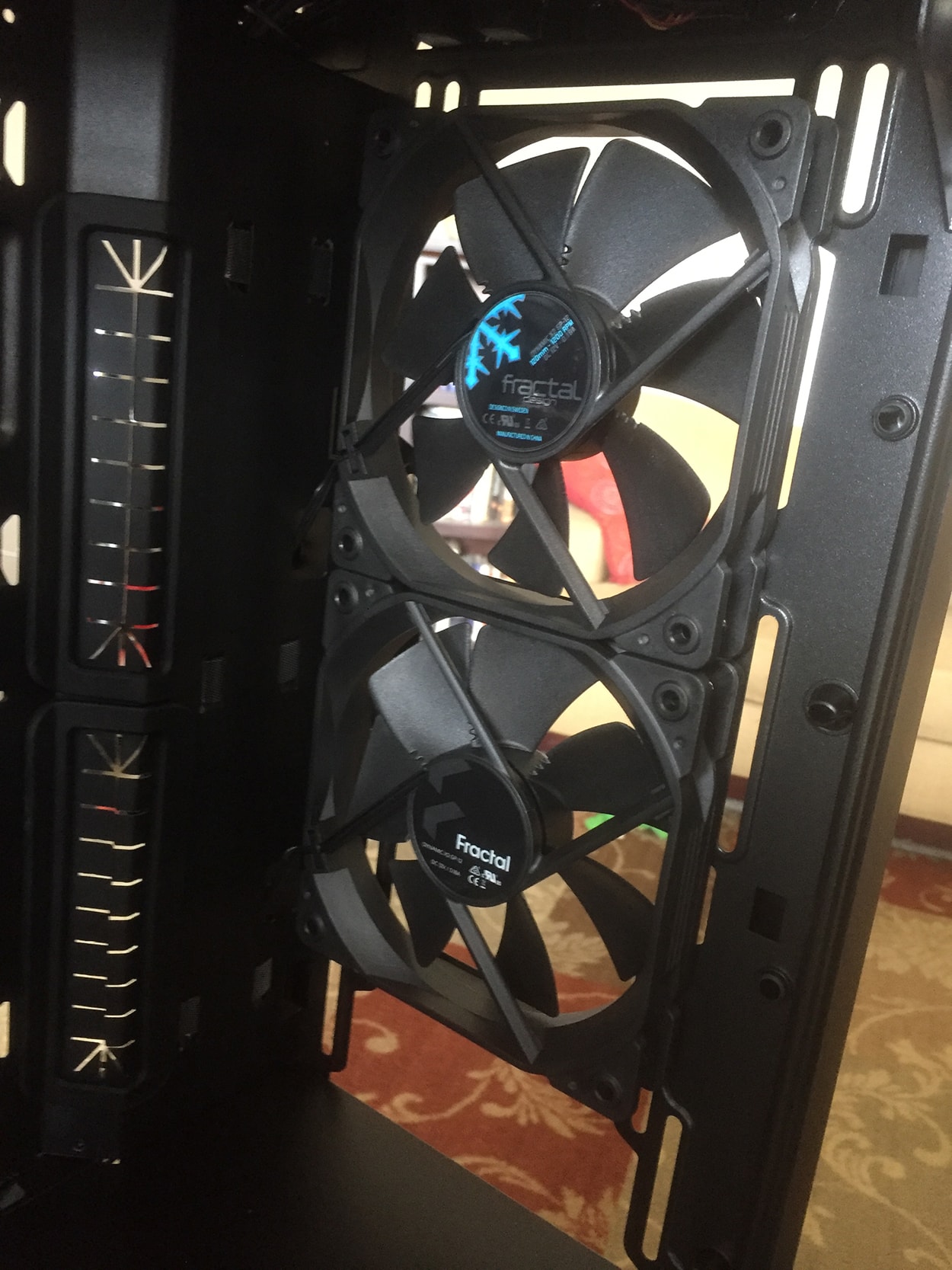 ​
I took a pic of the extra fan I installed before I had to take it out because the original GPU I wanted wasn't available so I had to get one of the fancier third-party company versions that ended up being too long, thus the fan couldn't fit. I turned it into exhaust fan out the top. 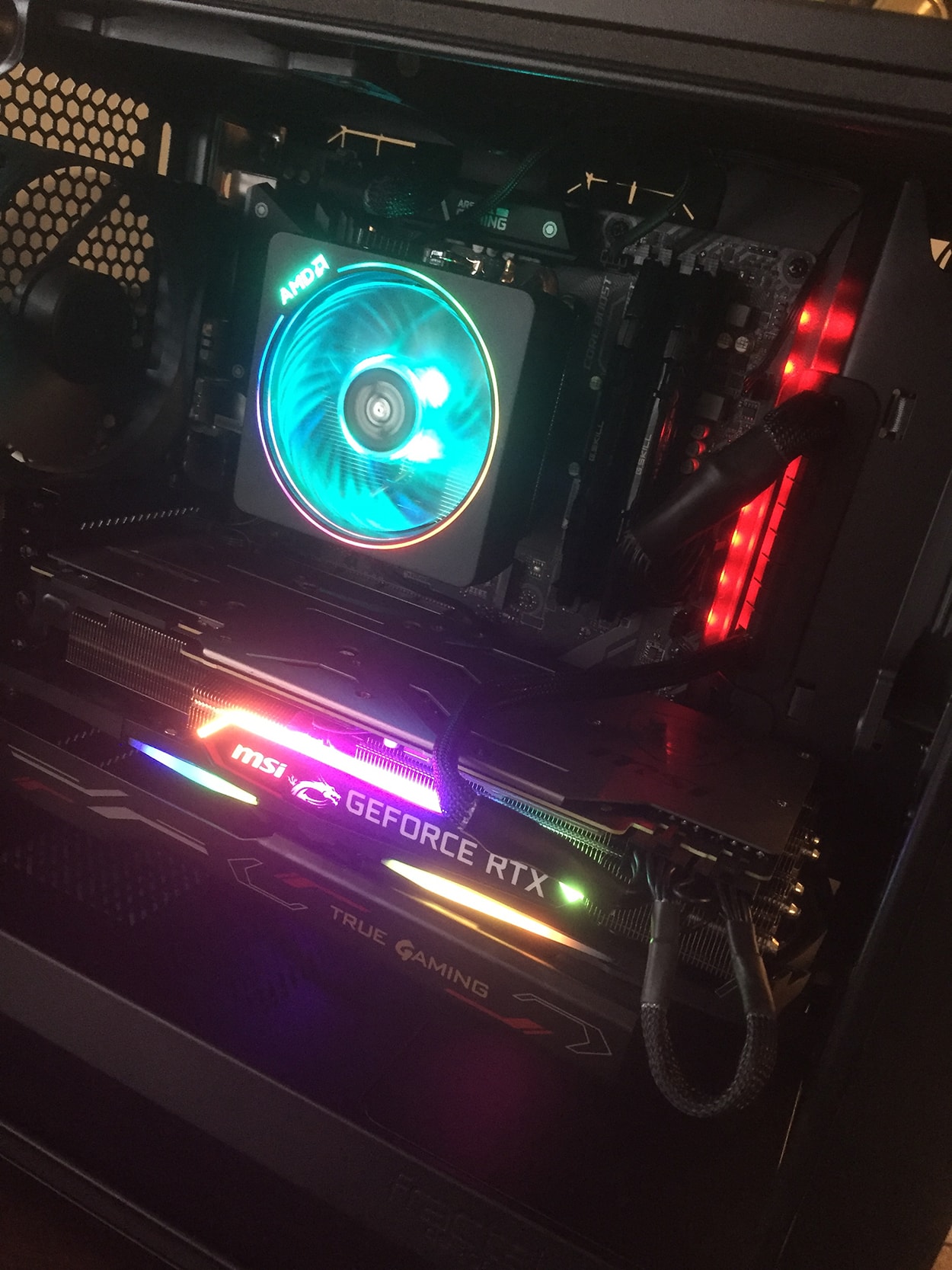 ​
Here was the first time I turned it on. Unbeknownst to me, the CPU cooler, motherboard, and the GPU had LED's on it. Had I known I'd have gotten LED RAM sticks too. I don't care about this feature. I've yet to install the software to control the colors. I'm either going to set it all to red or blue, or turn it all off.

Anyways, it's been fun putting it together. I've spent maybe one real play session on it and it was on the first South Park RPG that runs at 30fps. I started it before the HDMI cable came in, and I'll probably finish it before jumping on some other games.

Steam was running a sale about a month ago and I picked up:
I'll also end up getting:
I have already and have played some of them:
Anyways. How'd I do? What games do you like? I have about 16 years of back catalogue to catch up on. I like Fantasy/Scifi/Horror stuff. I like RPG's. I like story driven shooters and the games that are like the Tomb Raiders and Assassin's Creeds. I know Uncharted fits that bill but I don't think they're on PC.

I'm going to load up on games every time a Steam sale rolls around, and pick through the old stuff first so I'm not just waiting on new games to come out. It's going to be fun to blast through them all on Ultra graphics and not drop below 60fps.

You can play everything there. If you want to go back, you can play a ton of emulators from ps2, wii, psp, nintendo, there is even a ps3 emulator now I think.

If you like Scifi/Horror stuff combined on a story driven FPS shooter. You are going to freaking love The Metro Saga: Metro 3033, metro Last Light (get the redux version) and Metro Exodus (the last metro, an open-world, I didn't play this one yet). I have the books too, and they are awesome btw.

Super sick! If you ever try Call of duty : modern warfare ( the recent one) please add me!

You can play with your cat! Pet the damn kitty.

No joke, I was actually thinking about buying a gaming computer again. I feel that I've outgrown consoles, actually years ago, but I do like the odd game and particularly the kind of strategy games that the PC is great at.

Thanks for the inspiration, I don't think I'll want to spend 2k yet tho.

Alien Isolation (horror) and my favorite is Prey which is sci-fi, horror and rpg in one.

bernard said:
You can play with your cat! Pet the damn kitty.
Click to expand...

If you look in the pic, he's actually looking up at the ceiling fan and lights. I give him his treats on that table and he always looks up at the lights and burns his retinas and then gets scared about it. He's so dumb. My dumb little keekat buddy!

Thanks for the suggestions on games. I actually have a text file that I'm keeping all the suggestions and ones I'm remembering in so I eventually play them all. I'll look into all of them tonight in depth.

Once I wrap up my work tonight I'm going to fire up DOOM with max graphics and get my first real "technology shock" as I mentioned. It's going to be HYPE.

I am always tempted to do this (I hate playing shooters on console) but either work or family time would need to suffer. Enjoyable read though.

@bernard Thanks for reminding me that I need to check out the newer Prey game, did you play the original one from like a decade ago? I thought it was kinda unique at the time, interesting theme etc - they kind of rebooted it or something right?

@Ryuzaki Dead Space is a must-play if you're into Resident Evil. It's one of my favorite games of all time. It was a similar "whoa" experience for me as playing Bioshock for the first time, I'd almost describe it as Bioshock meets RE. I'll hit you up with that code for Frost Punk too, it seems to me you enjoy some strategy/resource management type games, ya?

Potatoe said:
it seems to me you enjoy some strategy/resource management type games, ya?
Click to expand...

I do. I like incremental games (numbers go up, wheeeee). I like city builders, etc. The one thing I don't like is open-ended sandbox games. I'll play them and enjoy them but get bored quicker when I know I'm not working towards an ending and a resolution to some kind of story.

Let me recommend another one, survival/resource management game, which would probably be great on PC.

Subnautica, sci-fi, resource management, gorgeous water graphics. It is "open world" though. It was a mindblowing game for me, as I don't really play much, and I imagine it looks amazing on a high end PC.

@Ryuzaki K sweet, I think you'll really dig Frost Punk. I'll give away some other steam keys I have kicking around, too. I wonder what the best way to do that would be, I've heard of bots snatching up keys for games that are posted in plain text so maybe I'll add in some extra characters or something lol.

Subnautica looks cool, I didn't realize it has resource management elements to it, I'll have to add that to my list too. I'd watched people play it a bit but I just thought it was like a "swimming simulator" lol like that dolphin game from Sega or something.

My guy, you got me excited to learn that the whole kings quest collection is on steam! I rarely hear people talk about that series! Most of the KQ games are my favorite and I also love the Monkey Island games. Those 2d pixel games will forever be the best.
You must log in or register to reply here.