You really don’t know the United States mate. We don’t take seriously, nor actually care about consequences of our actions. People will vote for Kayne just to say they did. Biden is barely a serious candidate so any opportunity to troll, the trolls will come out.

You are putting too much faith that Americans will “grow up”, look at how people are reacting to corona and being forced to be inside... Any excuse left or right, they all came out to protest, some are protesting against protests. And than there are the anti-anti-protesters. Meanwhile stock market is making crazy gains. At this point it’s like a college frat party that’s nobody decided to call the cops on.

If Kayne gets on any ballot he will get 10-20 million votes easily, although I put blacks at only 25% of his total. Democrats better hope and pull every gimmick they can to make sure he doesn’t get on any of the 50 states ballots, people will still write him in cause they don’t like either choice.

All you have to do is look at what happened when people that make under $100k got their stimulus check, they immediately spent it on dumbshit through ecommerce, not for essentials but for luxury goods.

Don’t put faith that Americans are going to be reasonable...

Non-Trump/Clinton candidates captured nearly 6% of the votes in 2016. We're talking a group of nobodies including Jill Stein, Gary Johnson, and Evan McMullin.

If those nobodies can grab 6% of the vote, someone with Kanye's immense fame can easily do that by himself. Probably double it.

Kanye will also have the full support of arguably one of the 10 most famous people on the planet -- his wife.

Let's not forget, Trump was considered a "joke" candidate at first, too. Next thing we know he's crushing the political establishment, the entire main stream media, and all of Hollywood on his way to the White House.

Obviously, Kanye has zero chance of winning as a non-major party candidate, but there should be zero doubts he'll garner enough votes to heavily effect the election.

You really think a big chunk of black and young voters wouldn't vote for a Kanye/Kim K ticket over an 80-year-old, dementia-riddled career politician with a history of being a racist pervert? Come on . . .

I'm of the opinion Trump is going to win regardless, but if Kanye does run, it becomes a 100% lock.

Thinking about it, I could see Kanye get some votes with the first time Gen Z voters in particular.

Those young ones, who aren't yet on college campus.

Would be a nice f you vote from them, since unlike Millennials, they don't have anything to win or gain either which way. I don't think Biden will do well with the 18-22 crowd. Hillary had the woman angle which could get some young white women to vote. Old man Biden? Nah. Neither will Trump. Green party for them or .. Ye.

Depending on how this goes, this could go down much like the election of 1912.

Which, some of you have pointed out ( meaning, how it could end up ). Just wanting to throw some history in there to show this potential outcome HAS happened before in our history.

Splitting the vote on purpose has worked in the past and can be very effective.

Kanye says he's taken off the red hat and wants to model the U.S. on Wakanda.

Translation: he's distancing himself from Trump and going to outpander the Dems in order to maximize the damage to Pedo Joe. 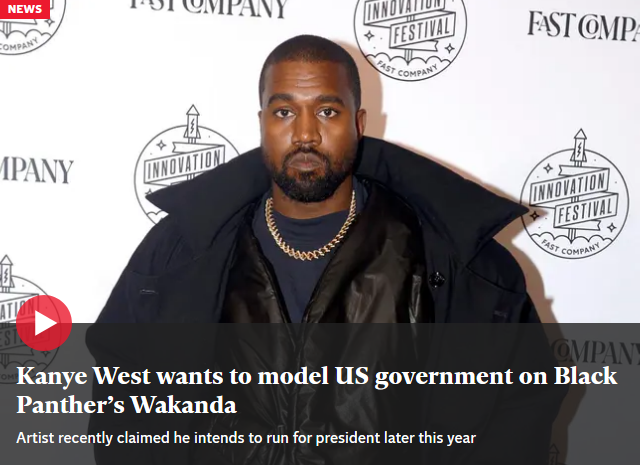 Next up: promises of huge reparations.

Let The Circus Begin
Can this year get any more interesting?​