Wordpress to form a "Speed Team" for Core Web Vitals as they fall behind Shopify, Wix, Squarespace, and others.

The Wordpress team and contributors have finally realized that bloating out the platform isn't a good idea. Maybe it was, but Google turned the tides when they emphasized the Core Web Vitals, which left Wordpress sitting on their thumbs wondering what happened.

This is what happened: 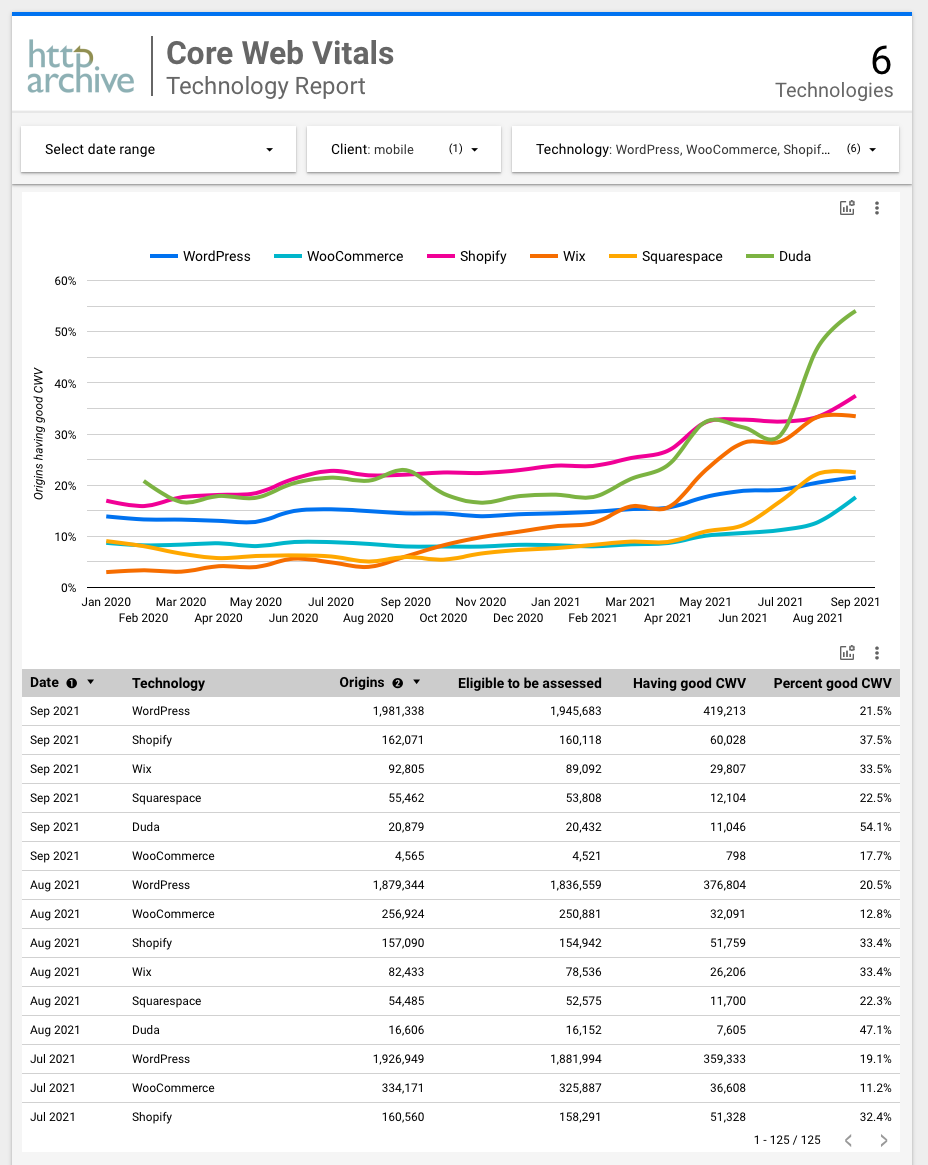 This is the official CrUX (Chrome User Experience Report) data from Google showing the percentage of sites on each CMS (content management system) that passes the CWV (Core Web Vitals) since January 2020.

The only thing Wordpress is beating is WooCommerce (which is also Wordpress, so it's doubly failing). Squarespace surpassed them recently, and Wix, Shopify, and whatever the heck Duda is (good promo for them!) are stomping them into the ground.

Wordpress was content to make speed an issue for the people and to let the solution be plugins. Now they realize they need to fix the core and stop letting everyone else apply bandaids for them.

It's not necessarily all their fault. Dummies install Wordpress, install 50 plugins, get the bulkiest themes that look nice, put them on $1 a month shared hosting environments, upload giant images, etc. If the theme and plugin developers don't care about speed, and the user doesn't know about speed, then it makes sense this happened. Especially since Wordpress has way more users and is free, meaning way more uneducated users.

So they've proposed making an official Performance Team to play catch up. Good! They could start by demanding everyone (plugins and themes) stop reliance on jQuery so we can stop loading that library sitewide, and turn THAT into a fallback plugin instead, or even a checkbox in the settings. They can stop forcing everyone to load emojis. I could go on and on, because I shave tons of HTTP requests and payloads on all my sites with Wordpress that simply shouldn't be there.

Here are the "Performance by Default" highlights:
In their proposal includes some stuff like:
My opinion is at the end of the day it's going to end up being crap like making sure servers have certain packages installed so they can use caching and image optimization in the core. There's not going to be anything ground breaking going on, just the merging of plugins into the core, essentially.

While we're at it, they could finally pay off Gravatar to break what I assume was some lifetime contract, so we can stop loading that crap, and they can finally allow profile pictures for authors in the core. It's insane that still isn't there, too.

That's a great proposal, much needed, and definitely appreciated by all the WP user base.
However, I think the real performance issues are not directly related to the WP core. Just like @Ryuzaki mentioned: bad hosting, poorly written code (frontend and backend), unoptimized assets and a whole lot more factors in play have more weight.

Shopify, for example, has taken good steps towards good UX (and also DX). They allow you to build your own frontend with more flexible tools like React and Vue.

I love seeing this kind of commitment and modesty from the WP team.
You must log in or register to reply here.