It's been maybe 2 months (?) and we're about to get Wordpress 5.1 this week. That should roll out February 21st (Thursday).

Site Health
So Wordpress has decided to take the Site Health plugin, one I never used or even knew about, and roll that into the core of the CMS. Basically, it checks your PHP and MySQL versions to make sure everything remains compatible, has some debug section that tells you about your server configuration so you can share that with theme and plugin developers, and some kind of troubleshooting method that disables your plugins and puts you back on the current default theme so you can more easily determine what's causing a problem.

Gutenberg Block Editor
So apparently what's going on is that the Block Editor in the core is versions behind of the official plugin, and what they're doing is integrating newer (older) versions of the plugin into the core with each new version of Wordpress. So what we'll be getting this time is everything that's in version 4.8 of the Guterberg plugin. That includes stuff like a mobile editor, some much optimizations (it's pretty slow to load the edit page), and some enhancements and bug fixes.

Gutenberg the plugin just hit version 5.0. It has crap nobody wants like an RSS block so you can show another site's feed on your own, a Kindle block to show books from Amazon, and changes to the Cover Block background image where you can move it around to choose a different focal point. Yay. Of course it has a ton of bug fixes and enhancements. Don't forget to add these to your block whitelist if you want to use them but are already customizing. Speaking of customizing...

Gutenberg Phase 2
This Wordpress 5.1 release edges us ever closer to Gutenberg Phase 2. This basically confirms that they were worried about Wix and SquareSpace, because we'll be moving from "post editor" to full fledged "site builder." 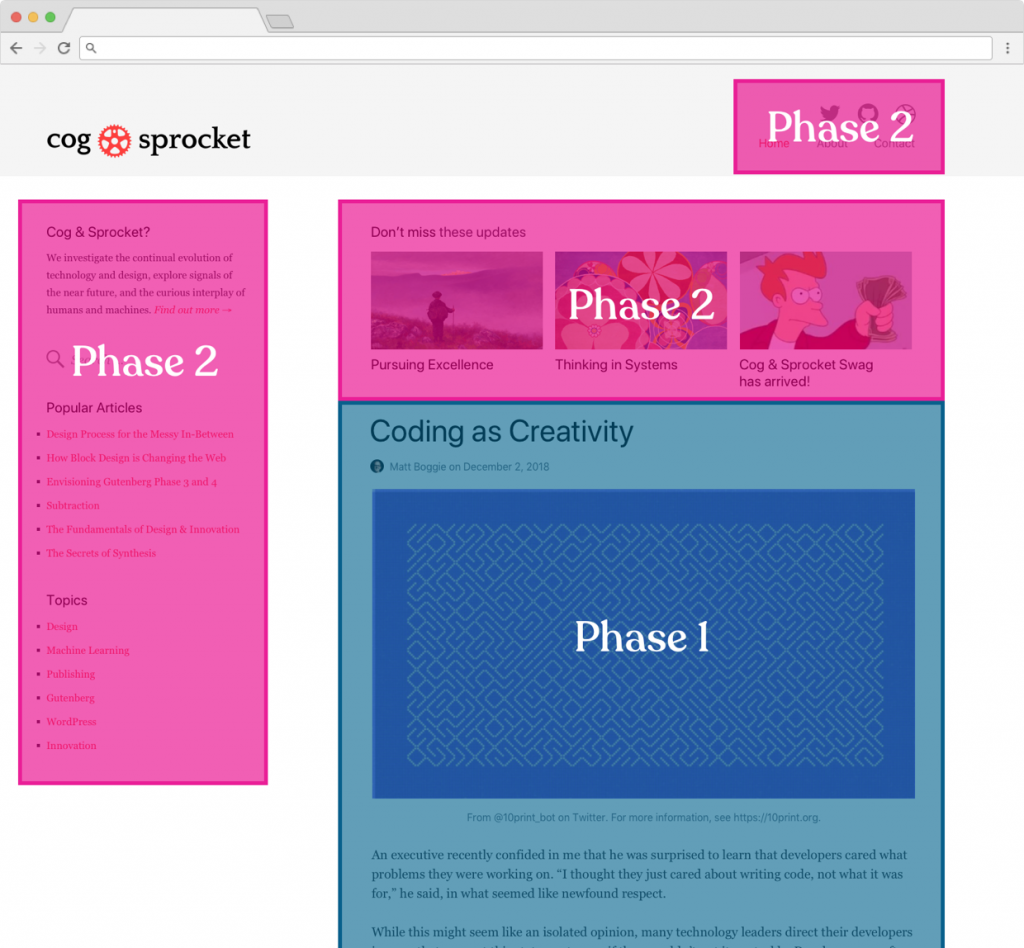 ​
Phase 1 was "let them make posts." Phase 2 is "let them make menus and widgets." To make that happen, they're tying the Block Editor into the Customizer and transforming all widgets into blocks.

It's not clear if the Widgets and Menus dashboard pages will go away. It really sounds like there will be the Customizer and the Post/Page edit screen and that's about it. You'll be able to tweak everything from those two panels. I say this because they want us to be able to "edit blocks in-context."

As a theme developer, I don't plan to integrate into any of this. I'll continue to hardcode everything in partials and insert them through the theme templates where needed. Most companies don't need to worry about all of this, they simply need to add content. Crippling their ability to hurt themselves and narrowing their focus to just content editing only is a big focus of mine, and that includes disabling a lot of features in the Wordpress dashboard as it is (like removing anything and everything related to comments if they don't use them, from the sidebar and top navigation bar, etc.). I'm already learning how to reduce the zillions of options in the block editor too.

Less is more, but that's not the direction Wordpress wants to go. That's good for some, bad for many. I try to K.I.S.S. (Keep It Simple, Stupid!)
“Don't get sidetracked. If you do get sidetracked, get back on track as soon as possible. Ultimately sidetracking kills you.”​

I upgraded to Gutenberg 5.1.0 today and I got this nice little reward:

For some reason, this only happens in Safari. The block editor still works ok in Firefox and Chrome.

mikey3times said:
IFor some reason, this only happens in Safari. The block editor still works ok in Firefox and Chrome.
Click to expand...

I just jumped to Wordpress 5.1 and Gutenberg 5.1.1 and all seems to work fine. For now.

@Ryuzaki, I'm not sure Phase 2 is such a bad thing. I agree with you on the partials and hardcoding into the theme templates for most things, but I also like to have custom sidebars for my articles so they are more helpful and relevant than "Recent Posts" or "Same Category". I also like to make a custom TOC stickied in the sidebar. It helps me lead the reader on their journey.

Right now, I use the Content Aware Sidebars plugin and it does what I need, but it is a pain jumping around to different screens. It would be awesome to have all of that right in the post editor. Maybe on one article I want an ad block, but on another I want an affiliate offer, and on a third article I want to push one of my own products. If all three articles are in the same category, this gets challenging without making a template for each specific article.

As you said, this makes it harder to keep writers or employees from messing things up so hopefully we can set up more user types and then grey out some of the editor elements so that only certain people can edit certain components. That way, the writers stay in their lane and the editors or category managers can stay in their lane.

Is this not the same as Divi?