Hi - Im a bit confused on site speed, it does not seem to be as simple as a site loading fast has a fast site speed score.
Im only really concerned about site speed for ranking at this time, the sites I have in mind work find on a mobile and on a PC as far as I can tell, they are not lightening fast but I would not moan about them, however, these often score badly when running something like pagespeed insights.

When you are trying to make a site fast in the eyes of google there are obvious things like using compressed images etc but when you can run something like pagespeed insights and get a score of 20 but then gtmetrix gives you a B (both with different recommendations on what to optimize) - then you run something like sitebulb and it tells you to do something like above the fold CSS (and flags it as critical) but gmetrix is giving you an A on "putting CSS in document head" while pagespeed insights is telling me the most important thing is next gen image formats but that is not talked about anywhere else.

How do you approach this madness as a non developer who needs to get a dev to do A then B then C? Anyone who has every tried managing a dev will know they also instinctivly react to things by saying "that wont work" "why do that" etc so there is that side of it but the biggest issues is Im not clear on what needs fixing myself.

Is the aim for a good pagespeed insights score? A good gmetrix or something else Im missing

Use PageSpeed from Google. Since you are trying to rank in the search engines from this approach go off of the tools they went through the trouble of making.

That "next generation image" nonsense, IS nonsense IMO. I ALWAYS ignore that since there are browsers that do not show webp images and such (iPhone iOS Safari doesn't support it - sauce: https://caniuse.com/#feat=webp). However there are a host of other problems to tackle if you are getting a pagespeed score of 20 - no way that's "next gen image". Complete all the others and you can get in the 90+ range which some niches need to rank. 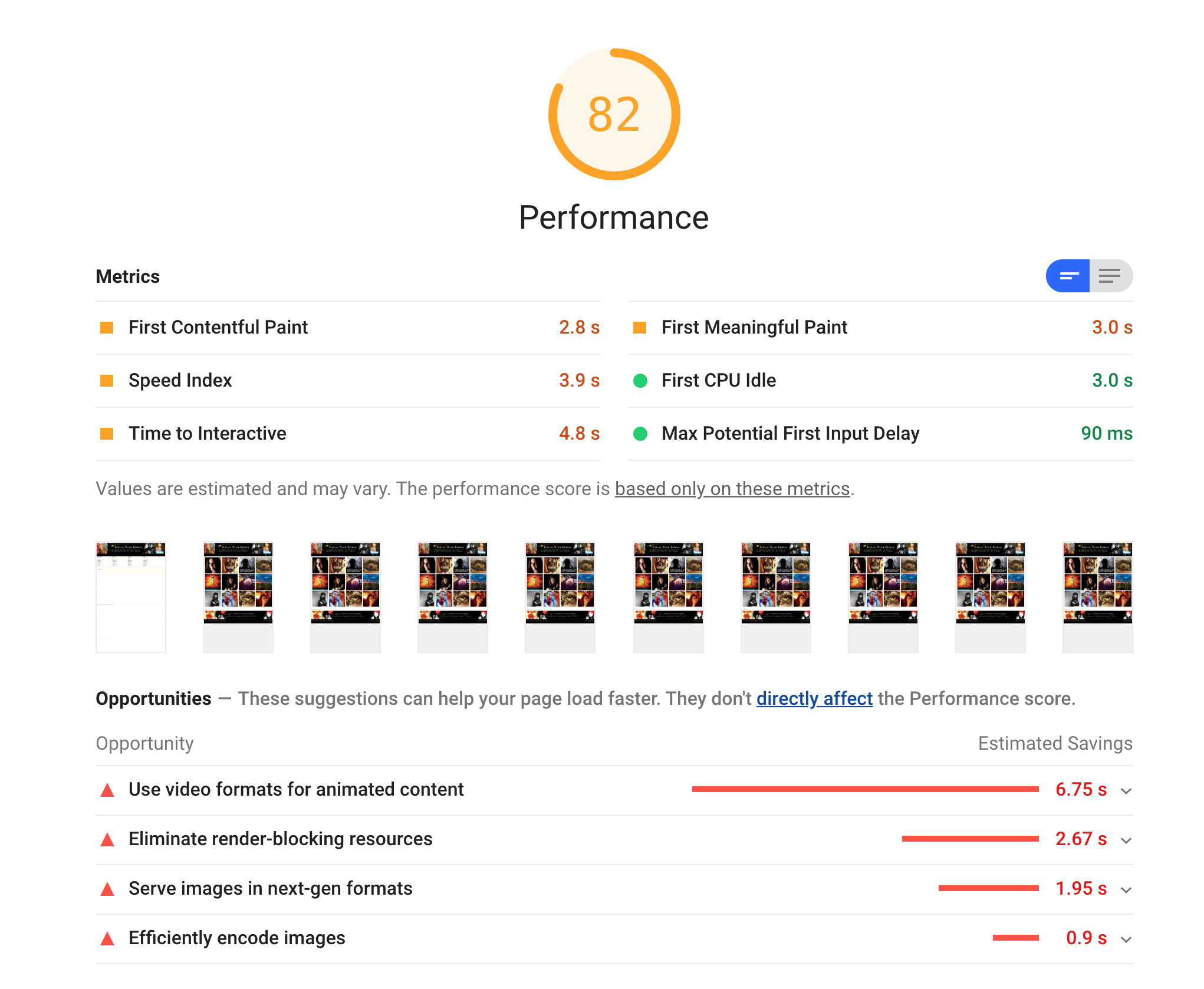 That "next-gen format" is like #3 on my MoneyOverEthics.com site, however i still have an 82 score on mobile, yet my site isn't even mobile responsive. If I fixed the first two and I should glide into 90+ territory, but even if I fix everything they'll still complain about that "next-gen" image stuff.

Realistically .webp is never going to take off until Photoshop has an export option of it, no one wants to play around with the command line for their images, just nonsense.

Frog said:
Is the aim for a good pagespeed insights score? A good gmetrix or something else Im missing
Click to expand...

The main factors that Google cares about are First Contentful Paint and First Meaningful Paint.

FCP is getting anything on the screen. The key to this is a low Time to First Byte (TTFB) and getting rid of render blocking CSS and JS. FCP acts like a progress meter and lets the user know something is happening.

FMP is getting the first fat wad of actual content on the page so the user can start reading. This is why speed recommendations include adding CSS to the head for above-the-fold elements. This is like how some video games let you start playing when the loading bar has only hit 75%. You can start messing around and by the time you do that the site will have finished loading.

The rest is basically Time to Interactive. TTI means all of the elements are loaded, all the Javascript or Jquery or whatever else has the document tree available to act upon, etc.

I need to improve my website too (score for mobile: 45 / desktop: 77), I have a lot of images so webp format will help me but for now I just used "lazy load" for images. It didn't help too much so now I am trying to clean/delete unused code.

@Mayh do you adsense or something similar on the site?

no, only affiliate links, now I am trying to minify css / javascript, I already checked with css and score is better so during next days I will update JS too
You must log in or register to reply here.