Alright folks, I'm hearing reports of a de-indexation bug going on within Google.

A site was live in the morning, and in afternoon, then traffic dropped suddenly within the night time for ALL keywords and Google traffic.

I asked around and it looks like Ikea is getting slammed with an indexation bug (https://www.seroundtable.com/google-ikea-seo-issues-28904.html), and there is earlier chatter on Twitter about a similar situations going on.

I'm personally not seeing this, but is anyone else seeing anything odd in their Analytics data?

Not just seeing it but experiencing it
If Your Dreams doesn't scare you.
You Are Not Dreaming Big Enough!

It is cold and lonely at the top of the mountain, but you just can't beat the view.

100% am seeing this. Talked about it a little bit here.

The site: operator is basically useless. Today it shows 5 pages, down from around 80.

Some of the best content in the niche, a site that I thought was technically sound but have since discovered that Googlebot-Mobile has has a lot of "Other Error" in Mobile Friendly Tests. As it's not loading CSS or in some cases any images, it's breaking the formatting and becoming "Not Mobile Friendly".

"Valid" Mobile Friendly URLs have dropped to "1", despite 0 errors. This has been seen by many other people, though JohnMu claims that's totally normal.

The same situation is true in Speed (experimental); only 1 URL being reported on.

My biggest hunch is that this is a rendering issue. "Other error" using Mobile Friendly Test is apparently displayed when crawl budget is reduced. Google will fetch the HTML and some images, but won't download fonts, CSS, JS files and therefore the page doesn't render correctly. As a result, it's considered trash and deindexed or at least buried on page 8.

What could be causing that crawl budget decrease? No idea. Maybe an algo penalty is still the cause and I'm at fault. Maybe they are trying to run indexing more efficiently and had a major oversight? Maybe (probably) I'm completely wrong.

In regards to the “other error” is it related to youtube.com by any chance?

Or the ADThrive network?

I'm not seeing it based on rankings or income.

CCarter said:
In regards to the “other error” is it related to youtube.com by any chance?

Neither. Any Fonts, Images, Scripts, etc get "Other Error".

I'm sure YouTube and Adthrive are affected due to scripts.

@jjj_ Search Console shows tons of mobile errors even when they don't exist. It's been on-going for a long time and has been talked about by Mueller. He says that as long as your pages check out in the Mobile-Friendly Test that you're fine.

Apparently the test in Search Console is having severe issue with timing out, and it's usually on the CSS and JS files, causing exactly what you're seeing, a giant cascade of errors about screen width, links being too close, buttons not being big enough, etc.

Google is well aware and reassures us it's fine and doesn't affect the algorithm.

Ryuzaki said:
Search Console shows tons of mobile errors even when they don't exist. It's been on-going for a long time and has been talked about by Mueller. He says that as long as your pages check out in the Mobile-Friendly Test that you're fine.
Click to expand...

This is the thing. GSC gives 0 Errors.

Same with everyone else having this problem.

When using the test you link to (or the one built into GSC), this happens: 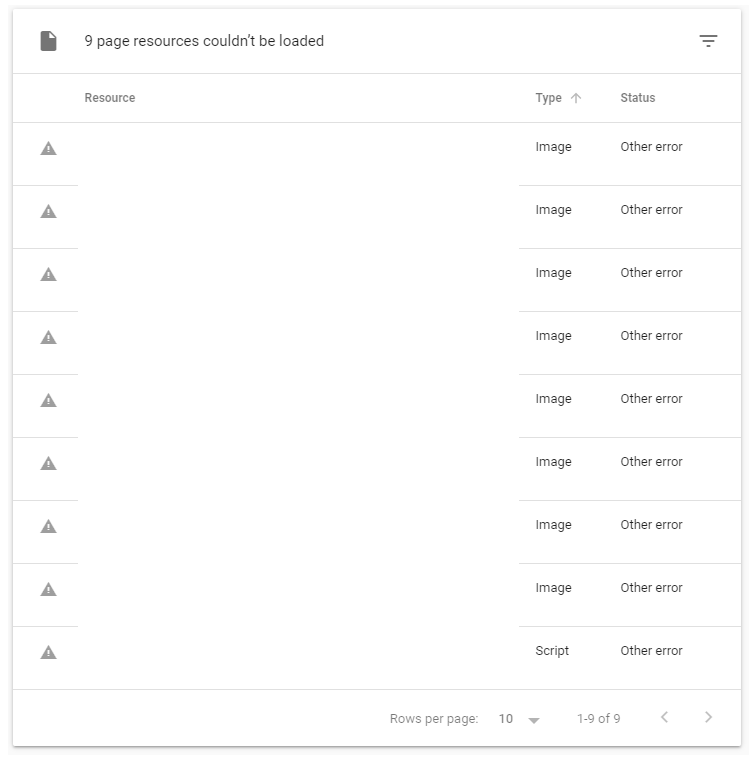 A bit more publicity for the issue, if it is a Google issue: https://www.seotool.ee/indexed-not-submitted-in-sitemap

@jjj_ The same issue affected lots of other sites, even I have one that has this issue. Some people that had whiter sites discussed directly on twitter with Mueller. Mueller replied that there seems to be no issue with the sites from Google's perspective.

It's a really weird situation. The sites don't move in SERPs no matter what.

@ianovici have you had any movement on your site that was affected?

Yeah, it started to recover. I'm also tracking other sites that were affected and they seem to recover. Not to the positions that they previously held but on page2.

I'll know in a few days if they remain or improve. It's weird because the positions dance like they are new sites.

The sites that caused me to start this thread also both reported recently that they've been recovering. One is recovering with higher rankings since their indexing is back on track. I advised both of them to "do nothing" - which obviously is a very difficult thing to do when things are spiraling like this, but they held through and are both back with 85% or more of their index back.

In the past 42-78 hours things are improving but nowhere near 85% back to normal. Like @ianovici the positions on mine as bouncing around a lot.
You must log in or register to reply here.