Featured Snippets have been amazing. If you can take down the snippet on all associated search terms AND take the #1 or #2 spot on all of those as well, you were getting traffic out the wahzoo.

Danny Sullivan has confirmed that as of today, worldwide, that will no longer be the case. If you get the snipped, you'll be filtered out of the following normal results. Makes sense, but it'll be sad to see the traffic drop. It'll be better for the search users and anyone who's not getting the snipped though. 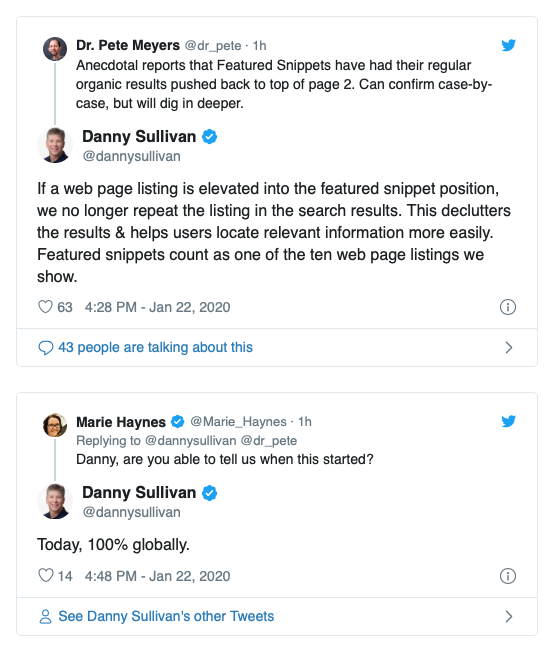 I'm really surprised this wasn't the case when snippets were rolled out in the first place.

I've got one page on one of my sites that brings in like 1/3rd of the traffic for this very reason. I'll report back in a week and let you guys know how it affects me. Some of us are going to see traffic drops and some are going to see boosts.
Schrödinger's Backlink: "I should have known that SEOs both want to hide the links and make sure they count." ~ John Mueller​

I noticed that over the last couple of days.

I would expect a drop in traffic as I have had a few pages where i've had the snippet and 1st for a long time.
Boo Hoo

TinFoilMan said:
I have checked this with lots of searches and it seems consistent where the snippet holder is always 1st on the 2nd page.
Click to expand...

I guess that's a some kind of consolations prize. Sullivan makes it sound like it'll be filtered all the way out but people are saying they've seen exactly what you're saying. I'll take the snippet and #1 on page 2 than just the snippet... *sniffles*

Schrödinger's Backlink: "I should have known that SEOs both want to hide the links and make sure they count." ~ John Mueller​

It will be interesting to see what happens when you lose the snippet now. If the snippet is treated the same way and can be taken from any page one result we wont know how we are doing on page one if we have the snippet until we lose it.

This is fantastic news - for me personally anyway

Are they still pulling images from (potentially) different websites? If yes are those websites also pushed to the second page

Yes, they are pulling images from different websites. I have a snippet image and the top listing under the snippet that I noticed this morning.

It's a big strange that they didn't do this from the beginning. But I really enjoyed the time I was able to be both #0 and #1.

In this case, isn't better to not take the snippet?

The change makes sense and is something that should have been implemented at the launch of featured snippets.

Unfortunately, this will probably be a net drop in traffic for me. Oh well, was good while it lasted.

proto said:
In this case, isn't better to not take the snippet?
Click to expand...

It will never be more beneficial to not be #1. The snippet is the first result and gets more than the lion's share of the clicks than the first spot did before snippets existed.
Schrödinger's Backlink: "I should have known that SEOs both want to hide the links and make sure they count." ~ John Mueller​

TinFoilMan said:
we wont know how we are doing on page one if we have the snippet until we lose it.
Click to expand...

This guy Kevin Richard (@512banque) on Twitter realized that Google only shows featured snippets if you're displaying 10 organic spots.

So his trick is to add &num=9 or 8, 7, 6, etc, to reduce the number of search results on the page below 10. So you'd append that parameter to the Google search URL to make this happen. And that removes the featured snippet and exposes where on the page (if not number 10) you actually rank, since the snippet can be pulled from any ranking on the front page.

His example is for the search "how to do seo" and the featured snippet URL actually is rank #3 if you use the trick. Otherwise it's #11 (which is #1 on page 2, which I assume will be removed soon).
Schrödinger's Backlink: "I should have known that SEOs both want to hide the links and make sure they count." ~ John Mueller​

The scenario where the URL of the Featured Snipped would appear as #1 on page 2 has now been fixed. If you have the snippet, you do not appear anywhere in the organic listings in the top 100. The snipped is officially #1 of the organic listings, not a separate feature or #0 any more.
Schrödinger's Backlink: "I should have known that SEOs both want to hide the links and make sure they count." ~ John Mueller​

Not sure if it's been said elsewhere, but it appears that if you have the snippet, then move up to position 2 (meaning position 1 in the text serps), you take that #2 spot and lose the snippet.

Several keywords I'm tracking were originally in spots 4 - 7 plus had the snippet. After google made the change I then had the snippet and was removed from the text serps (as everyone already knows happens), but since then, those keywords moved up to position 2 in the text serps and once they hit there they lost the snippet.
I danced with the devil until the sky turned black
It is hard to dance with the devil on your back
They buried my body and thought I'd gone
But I am the dance and I still go on

I've got some information now regarding this whole debacle and how it negatively affected traffic.

Exhibit A:
A page that dominates a certain basket of SERPs. It used to get the featured snippet and be at the top of the organic listings. Ignoring it doing even better in October 2019 before BERT figured out it probably shouldn't dominate as hard as it does, you can see at the end of January where the de-duplication of the snippet and organic listings occurred:

​
Exhibit B:
Just for fun, I had an old page for the same kind of SERPs as the page above. I reformatted and rewrote the whole thing to resemble the other page, knowing it would eventually take off. That occurred in November and you can see it slowly grabbing more and more traffic.

In mid-January I managed to get a couple links to the page, and you can see the traffic decay through early and mid-February (the rank transition bounce we talk about), and then the links start kicking in in late February. Then some update dropped this past weekend and boom, I now have the snippet:

Cash money. If you have pages that dominate, put out more in the same format for similar SERPs and eat up more real estate. I did this for 5 posts total and they're all doing this good, though the others have less volume.
Schrödinger's Backlink: "I should have known that SEOs both want to hide the links and make sure they count." ~ John Mueller​

Do you mean you have two pages, both targeting the same keywords and a) the first page is ranking well but does not have the snippet and b) the second page has the snippet. Thus, even though both pages are targeting the same keywords they are both ranking 1st page for those keywords?
I danced with the devil until the sky turned black
It is hard to dance with the devil on your back
They buried my body and thought I'd gone
But I am the dance and I still go on

@Sutra, no, sorry. The first page had both the snippet and the top organic listing for tons of keywords. Now it only has the snippet, and thus has less CTR in the SERPs and less traffic, as we predicted.

The 2nd page picked up the snippet. I only shared it to mention that I strategically fixed it up to mimic the first page. It targets similar keywords, but wholly different ones. You could think of it like "fastest land animal" on one and "fastest aquatic animal" on the other.

The point being that once you find a winning formula you should use it. The 2nd page wasn't really about the de-duplication issue, other than I was already in Analytics looking and figured I'd share some actionable info.
Schrödinger's Backlink: "I should have known that SEOs both want to hide the links and make sure they count." ~ John Mueller​

Ahhh ok. Great. I was actually wondering about this. There are some very similar keywords in my niche that I've been meaning to test this with. Now, I'll do that sooner, rather than later.
I danced with the devil until the sky turned black
It is hard to dance with the devil on your back
They buried my body and thought I'd gone
But I am the dance and I still go on

My new strategy for this whole duplication issue has now changed to I need to have 2 successful websites in every niche to get both the featured and #1 organic result. Its double the cost and more work but looking at it now the different article writer and style of article make me rank for different longtails and the 2nd site ends up picking up a large amount of traffic I wouldent have gotten with just the one site before these changes.

I saw similar decreases to you in the graph one site lost about 35% in revenue since it was very centered on buyer intent keywords.
"Every day, in every way, I am getting better and better" - Émile Coué
You must log in or register to reply here.