I know I'm massively late to this. I kept seeing about it but ignoring it, and I never browse the web on my phone. 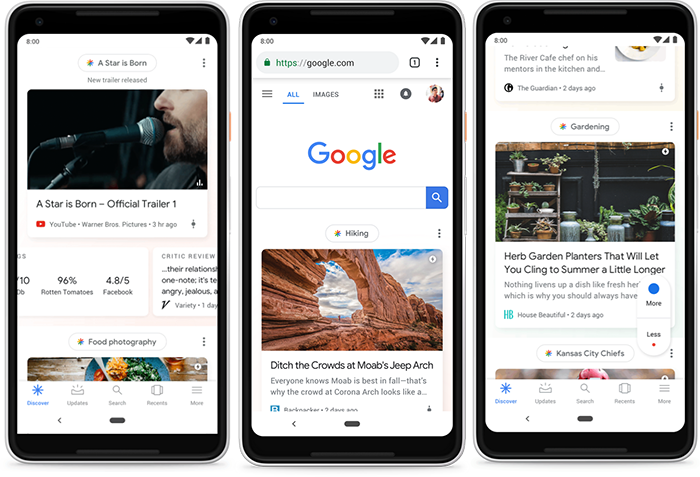 ​
This is what Google's homepage looks like on mobile now. It's a feed of content related to that searcher's previous searches and interests.

Turns out it's been this way since around September 2018. Google announced it in this blog post and after reading that I've found that it was actually there since 2016 called "Google Feed." It's crazy that I'm that far out of the loop.

Anyways, the reason I'm bringing it up is because the new Search Console has a section under Performance next to Search Results called Discover. I clicked it and discovered this:

​
That's not bad. That's a lot of impressions (free brand marketing) and a decent amount of clicks. This is over the past 90 days though so it's nothing incredible, but look at me climb.

Google Discover doesn't only include stuff you're interested in that's new. It features evergreen content and then also trending topics in general. You can also customize the feed like you would Apple News or whatever else that's similar.

I think we'd all love to score tons of extra traffic from this...

Soooo... who's cracked the algorithm?

I just noticed one of my websites lost nearly all its discover traffic after Nov 8th 2019 update. It was only getting about 100 clicks a day but is flat lining now.

Just wondering if your lovely graph above is still climbing?

Has anybody else noticed anything in their Discover performance since November update?

In the same 90 day time span, my clicks have just over doubled as have my impressions.

If you look carefully at the number of clicks, you'll see that my numbers never declined, but grew and then stagnated, then got a huge boost in late October.

I'm fairly certain a lot of it has to do with freshness and you can get into the "trending" side of things by renewing your freshness. It's kind of a "what's new to discover" feature it seems.

I didn't do anything to create that big jump in October, though.

Freshness is not a problem at my end as been updating things regularly on this website. Good to see your graph heading in the right direction.
You must log in or register to reply here.