I don't have a problem with this, though some may see it as an overreach of power and influence again.

Basically, if a display ad drains mobile battery life and saturates already strained networks with thousands of HTTP requests and eats up limited mobile bandwidth, it will be blocked on desktop and mobile.

There's three thresholds they're measuring per advertisement:
This is designed to target networks that allow poorly programmed ads to slip through, ads that aren't actually display ads but pixel droppers and data collectors (*cough Sovrn cough*) and ads that mine cryptocurrency.

Chrome already blocks all ads that don't meet the guidelines laid out by the Coalition for Better Ads. So it's not that they want to choke out all ads while letting Adsense survive. This is one case where I see it as a net positive for the internet. If the ad situation gets cleaned up good enough, we may make more money as people begin to feel they don't need ad blockers (especially if they hear that they're built-in now, like Chrome's).


"The thresholds (4MB of network data, 15 seconds of CPU usage in any 30-second period, 60 seconds of total CPU usage) represent just 0.3% of ads, Google said. And yet they account for 26% of network data used by ads and 28% of all ad CPU usage." ~ VentureBeat​
​
This is what it will look like if an ad is blocked: 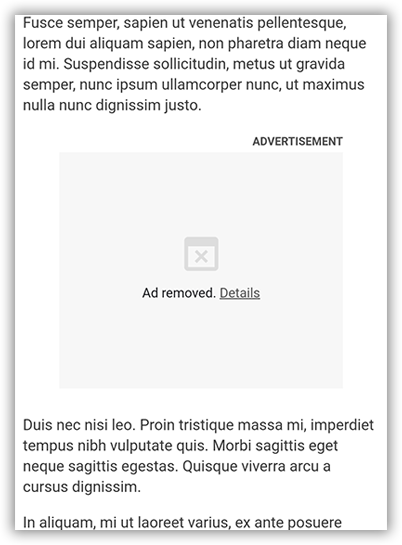 ​
I think the real danger lies for people reliant upon bottom-tier CPM ad networks like Sovrn or any header-bidding network that uses these exchanges as part of their bidding pressure. Hopefully the offenders will switch course sooner than later or we'll all be in for a revenue-reducing surprise.

There are site that auto refresh the page just for that extra display CPM on mobile while you attempt to read, jebus christ.

Squeezing the user to the point they don't want to surf the internet and therefore move to mobile Apps like Instagram, TikTok, and other walled-garden environments isn't a smart in the long term for websites that want to survive. When the eyeballs move to Apps - your website gets less and less attention than it could be.

I have a feeling if there were no intrusive ADs the IG and TikTok Apps of the world would not need to exist cause the experience would be clean from the get go. But if you spam people to death you can't blame them for looking for alternatives.

This is about survival of the "Web App" versus other walled-garden environments.

It's not over-reach. Google, Apple, Microsoft, and Amazon, the big 4, all have visions for the future of technology. They're staffed by futurists. They want a future that's like X, Y and Z. Here, Google wants a faster Internet, especially on mobile.

It might be controversial now but it's the same thing as Apple taking out optical drives back in the 2010's. It was the future and Apple was avante garde. Here, Google's blocking resource hogging ads. It's a good move and reasonable move.

It'll make their Android user experience better, especially in developing markets. They want to keep, grow, and cement their market share with loyal customers. This is a move in the right direction for Android as Google can't control the hardware that manufacturer's are installing Android on. It might be very slow and low budget. Those consumers will benefit from this policy.

For Desktop Google Chrome, this was something everyone was doing personally, having adblock installed. They're just legitimizing it.

The people who suffer from changes like this are the ones who fail to adopt, sorta like how Sears failed to adopt. Hopefully other companies will follow suit and become more customer centric.

As a user, this is great news. Many newspapers use so many ads that they can bog down older systems. Using an ad blocker has more or less become a necessity for browsing newspapers.

As a webmaster, I hope I can keep a business model that doesn't require 8 ad blocks pr article.

This might be a bit ironic but Chrome is actually slowing down your computer with something called "KeyStone":

Here are instructions on how to remove Chrome and Keystone: Chrome Is Bad: Keystone

I never trusted those guys...

Does this go for Chrome derivatives like Brave and Chromium?

I found some references to KeyStone within Chromium's ~/Library folder so that's not good:

However it's not as preveleant as what I found within the Chrome and Google stuff. KeyStone was everywhere, I deleted it all. Maybe I'm imagining it but my Mac seems a bit faster. I don't think the Chromium version is executing KeyStone, but who knows, I'm going to keep and eye on it.