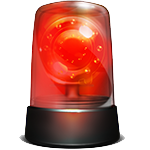 --- Public Service Announcement ---
Google Analytics Bug​
I noticed yesterday while traffic leaking that Analytics was showing what had to be drastically low numbers.

I'm not sure exactly when it started, perhaps on the 16th at some point later in the evening. But yesterday my site shows a 30% drop in traffic, with no sign of an update, no keyword movement, no suffering of revenue, no loss of ad impressions, etc. Has to be Google Analytics, right?

There started to be rumblings around the web from Twitter, Black Hat World, Webmaster World, and this morning my ad network even put out a statement.

Which is good because I about had a heart attack when I saw my ad network's calculations. My pageviews were way down the exact amount Google Analytics was, but my RPM was through the roof the same percentage... then I remembered that they do use my analytics data, so it makes sense it'd be off. I thought it was a confirmation I tanked at first.

Anyways, if you see yesterday's traffic is in the gutter, don't panic.

Whether or not Google is able to adjust those numbers is unknown. We might just have to add a comment to our analytics for "another big day at Google HQ."

Man, so glad it's not just me. My numbers were trash yesterday, kept me up at night.

Same, just a glitch in analytics, ad impression numbers all ok.
Sell me your website. PM me.​

Google has an App Status section on their site that shows when there's problems with their services (I should have assumed this was the case and looked for it): https://www.google.com/appsstatus

You can see Analytics has an orange bar from late on the 16th to late on the 17th. If you click that it tells you this:
The important part is this:

We should end up having accurate numbers, or close to it, eventually for that day, which is nice. I need to know how my traffic leaking went!

I was wondering what was going on because things just weren't adding up.

I had a post go viral in my niche all over social media, hit the #1 spot in a subreddit with millions of subscribers and stay there all day (every comment was positive, too), it's being talked about on the big podcasts in the niche, etc...

Sidenote: For every 5 articles that I assign to my writer on this project, I encourage him to choose 1 of the topics himself and just run with it on his own, and this was one of those topics so I'm not taking any credit here. In the past, some of the biggest posts I've had pop off for clients were ones where they let me choose the topic and run with it. There's something to be said about that. Think about enabling your writers more, give them a sense of ownership over (at least some of) their work, you'll be surprised.

Here's why something seemed off:

Day 1: Had about 30-60 live visitors all day, like non-stop from when it was submitted until overnight when it started to drop off a bit. But no single hour showed more than ~100 visitors total on day 1. Also these numbers seemed LOW for being at the top of such a monster sub, where every single person following it would be interested in this article.
Day 2: Had about 20-30 live after midnight and all throughout the night, but as soon as it hit 11pm - 12am area, it jumped to 300ish per hour, and stayed there. Two hours in a row each had 305 visitors, the one before had a couple more (You can see that in the beginning of the purple box in the 2nd screenshot.) 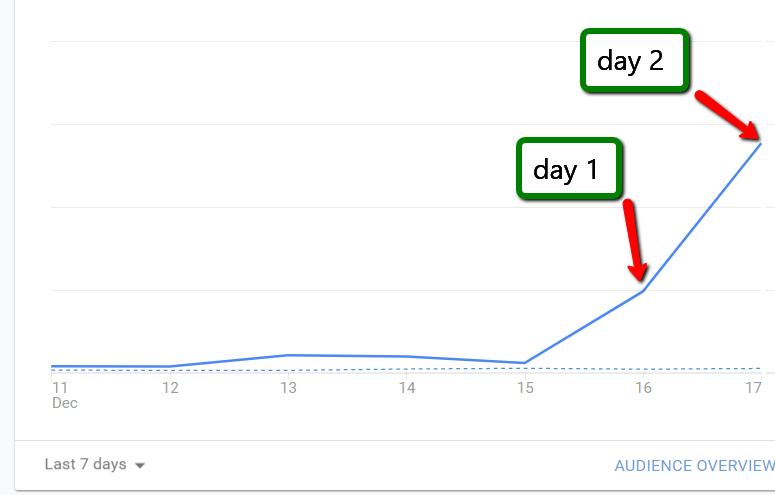 It just didn't make sense that Day 1 would be so much lower than Day 2 when Day 1 seems to have more people visiting the site. Every one of the prime viral hours on Day 1 showed less visitors than the overnight dwindling traffic as it slowly fell off going into Day 2.

I was scrambling to figure out what was wrong. My host assured me they can handle thousands of users at a time, but it seemed weird that a post could sit at the top of such a massive sub without ever breaking ~70 real time. I thought the host was bottlenecking or something, especially at the start of the purple box where it was getting almost the exact same traffic each hour and barely climbing past that peak.

The green box on the left hand side shows day 1, when the post was submitted in the afternoon and quickly climbed. The purple box shows day 2, where it was still sitting at the top of the subreddit and also getting other traction elsewhere. I'm not sure how timezones play into it, but right around 11-12 it's like the floodgates opened and Analytics finally started registering the traffic correctly. Those blue lines on day 1 should all be higher than the blue lines on day 2.
Marketing Pro Tip #1: Is your hosting provider good enough? Google "best hosting" and if your provider shows up on any of the lists on the front page, it's probably time to switch.

I almost sh*t my pants. 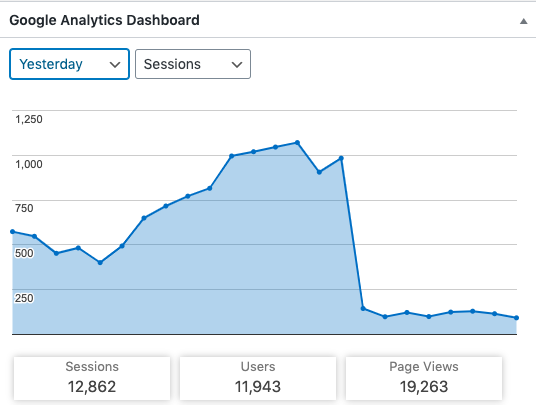 And as soon as I saw this on my dashboard, BUSO was the first place I came. Sure enough, you are on it @Ryuzaki
You must log in or register to reply here.