To quickly get through the boring part of the story, the Wall Street Journal got the tip off from Genius that Google was stealing their lyrics and showing them in the SERPs without attribution. Google says they license them from a 3rd party and the 3rd party must have scraped and stolen the lyrics.

Believe what you will, but that's not the interesting part. What's crazy is what Genius cooked up in order to catch the thieves. 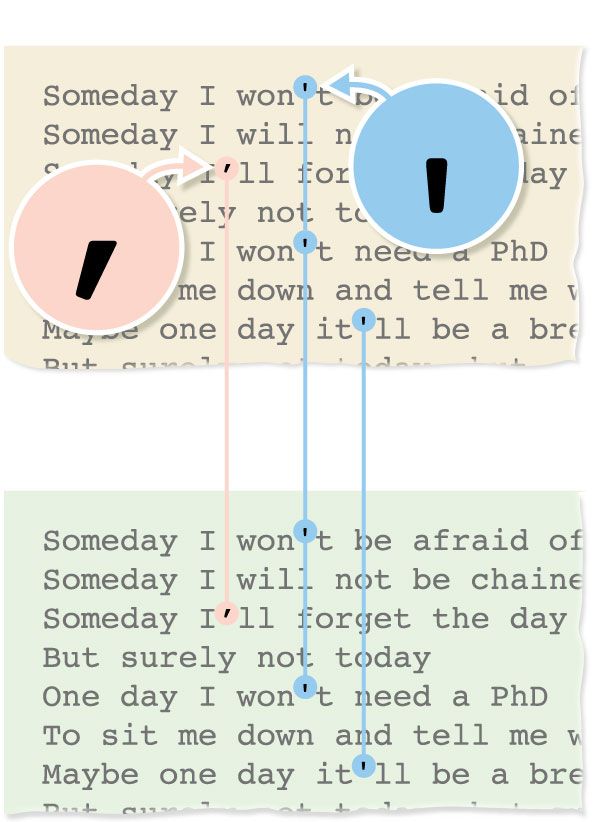 It's not random! They used the straight quotation marks to hide a secret message within this set of lyrics. I guess it had to do with the spacing or something, I'm not sure, but apparently the straight marks spell out the phrase "red handed" in Morse code.

So then Genius gathers up the evidence and shoots it off to the WSJ in order to drum up some publicity.

Google had this to say:


Google Communications
@Google_Comms​
Lyrics in info boxes on Google Search are licensed, we don't generate them from other sites on the web. We're investigating this issue and if our data licensing partners are not upholding good practices, we will end our agreements.​
​
Regardless of who did it, the proof is in the SERPs even to this moment: 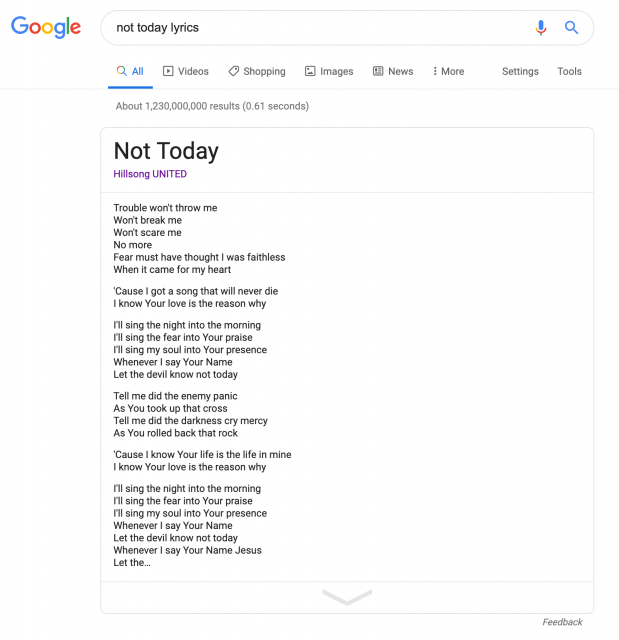 Fun story, it'll be interesting to see how it develops and resolves.

Interesting.
Trying to shift the blame to a third party provider is neither legal defense or a good explanation. Particularly not when you're a huge corporation like Google. Then it's your responsibility to make sure you're getting legal content. Quite surprised this slipped through, if it isn't a simple lie.

@bernard, I'd say that shifting blame is a great defense in criminal court, especially if discovery can prove it was the 3rd party. At that point you may be liable financially to some degree but not criminally. In civil court though it's not a good defense, for sure, especially in this day and age where intent doesn't seem to matter and you're guilty until proven innocent.

But it'd be like getting arrested and charged for a crime because your buddy robbed a bank and then called you to meet up for a beer and a hamburger. Just because you benefited from him paying for your burger doesn't mean you committed a crime or were even an accomplice.

Update to the Saga:

Google reveals that they 3rd party company is LyricFind.

The name itself ought to have tipped them off that they aren't creating lyrics but "finding" them.

LyricFind publishes a blog post titled "LyricFind Offers Corrections to Inaccuracies in Wall Street Journal Reporting", which can be summarized as such:

"Google licenses lyrics from us and the actual music publishing companies. Blaming Google of any wrongdoing is extremely misleading. We at LyricFind have a global content team to build our database. Our writers start with a copy of the lyrics from another site (lol) and then we stream the song and correct any problems. Genius previously told us we were copying them and we told our writers not to use them as a source. Here we are again, same problem. So our team must have sourced other websites that copied Genius, thus the quotation marks and Morse code being in there."

LyricFind offered for Genius to do the work of determining what they copied from Genius, and Genius was like "hell no, why should we do the work." LyricFind did it themselves and found 100 instances of copies in their 1.5 million songs. "Therefore Genius's claim is minuscule and doesn't matter due to the small scale. And Genius doesn't own the lyrics anyways! They don't even write them, and even if they did they don't own it!"

But then again, let's not pretend Genius (funded by Andreessen Horowitz [take a look at who all they fund]) is innocent nor is Google. Genius took part in a blatant backlink scheme and was penalized for it, and was un-penalized in less than 24 hours, but likely still keeps the benefit of the backlinks if not all the backlinks they gained from the exposure. And you only get unpenalized that quickly for something that bad if you have a backchannel into Google. So Genius isn't that innocent nor is Google in helping them in ways they wouldn't help us.

Fun times, bad publicity and tons of backlinks for all!

Google is going to save face by now attributing the companies that they got the specific lyric from, which they should have been doing anyways and should be doing in all rich snippets.

Good move by Genius. 100 copies is much less than 1%, even if Genius were to pursue this legally- any court would be hard-pressed to find this as blatant, fragrant or intentional infringement of copyright- assuming copyright of written lyrics by someone else is even a thing. That's why LyricFind said "it doesn't matter", it would not incriminate them in consideration of the scale.

turbin3 said:
just because you didn't fail, doesn't mean you did anything right
Click to expand...

An update to this story!

Genius Media Group is now suing Google and LyricFind for more than $400 million in damages over a breach of contract, unfair competitino, and lost advertising revenue.

They say that this has been going on since 2016 but they "caught them red-handed" as shown in the opening post of this thread. These "watermarked" lyrics using secret apostrophes have been found in nearly 830 lyric featured snippets in the Google SERPs.

This has greatly impacted their revenue (zero click SERP results) as well as just flat out taking their work and using it beyond meta titles and descriptions.

We'll see how it goes.

Ryuzaki said:
An update to this story!

Genius Media Group is now suing Google and LyricFind for more than $400 million in damages over a breach of contract, unfair competitino, and lost advertising revenue.

They say that this has been going on since 2016 but they "caught them red-handed" as shown in the opening post of this thread. These "watermarked" lyrics using secret apostrophes have been found in nearly 830 lyric featured snippets in the Google SERPs.

This has greatly impacted their revenue (zero click SERP results) as well as just flat out taking their work and using it beyond meta titles and descriptions.

Imagine this leading to a class-action lawsuit against Google from featured snippets and any other way big G gets people to stay in the SERPs and not click through to websites.

I don’t think this is good. Lyrics are either public or not. If they want to block google they can. It’s easy to cheer for the small guy but the precedents related to this will get passed on to rest of us. Copy-write enforcement system related abuse is draconian and non proportional. These guys really are biting the hand that feeds them to..... kinda weird lol

The truth is, G is using all of us. Increasing AI development and leeching off users on one side and increasingly concentrating market share and tightening its claws over webmasters. Both totally valid moves BTW. Quem pode mais, chora menos, or "those [who are] more powerful, cry less" is a Brazilian saying that comes to mind here.

The usual successful alternative here is what @CCarter always repeats: diversify, never rely on a single source of traffic, and so on. And he is right because this is something that, basically, depends on a single factor in this equation: you.

The way I see it, these webmasters figured out a way to game G outside the algorhthm arena (where G defines the rules) and took the battle to the court (where they may have a chance to cause damage). They made a multi-million dollar claim and they hope for a settlement out of the court. Even if it's just pennies on the dollar, it's a damn good payday.

The lawyers on TV series do it all the time. They make a compelling argument to convince the judge into forcing the big company into revealing their algorithm "because it's important for the case," the judge bites the bait, and then there's a settlement offer if everything remains off the record.

It's not even about having a compelling argument to win the case, it's just about getting the foot on the door for long enough until they can cause much more damage to the company.

If you think this is wrong, unfair, or whatever, then you are seeing it as an SEO. Think about it like a lawyer and it's just business as usual. (Especially because, should anything go wrong, the person getting counter-sued is likely the webmaster, and not the lawyer.)

The only thing I'd love to know (because that fascinates me on a personal level) is the people behind the idea. Think about the mix of skills overlapped: SEO, law, music composer, ham radio hobbyist, IDK. How did these people meet each other IRL and came up with the idea? It's almost like one of those jokes, "So, a priest, a rabbi, and a parrot enter a bar to change a light bulb and get stuck in the elevator. (...)"
“People will do anything for those who encourage their dreams, justify their failures, allay their fears, confirm their suspicions, and help them throw rocks at their enemies” -Blair Warren

I'll be surprised if they win however. Google's so powerful they can make the record labels side with them ................ It's been done before, multiple times over. The head of YouTube music I think is Lyor Cohen still, who's got big pockets in the music industry.

EyesExist said:
This is interesting.

I'll be surprised if they win however. Google's so powerful they can make the record labels side with them ................ It's been done before, multiple times over. The head of YouTube music I think is Lyor Cohen still, who's got big pockets in the music industry.

I was always confused why labels never went after these lyric websites. The lyrics are owned by the artist, right? I feel like it's more profitable for the artist/label not to sue these websites and not get involved. Maybe Genius licenses lyrics from the artists/labels?

ItsYoBuddy said:
I was always confused why labels never went after these lyric websites. The lyrics are owned by the artist, right? I feel like it's more profitable for the artist/label not to sue these websites and not get involved. Maybe Genius licenses lyrics from the artists/labels?
Click to expand...

depends if they copywrite it....... much of Hip-Hop isn't licensed properly..... a big mess sometimes but it all depends for sure. Id' think they are paying a fee.

Lyrics should be rights of the artists................... if they own their publishing I believe. Labels usually handle distribution and royalty collection. Used to. Who knows, now.

It's not a question of if the artists and labels own the lyrics. They do. They don't bother pursuing any of this legally because it's free promotion. Same with guitar tablature.

What happens legally is that the person doing the transcription owns the rights to that version of the lyrics or guitar chords, etc. Same with you writing a blog post using publicly available data. It's the same data available to everyone, but it's your work and your unique way of arranging it that makes it yours. It's derivative, but that doesn't mean you don't hold a copyright to it once you publish it.
You must log in or register to reply here.