Had to share this monstrosity. Strangely enough, a year ago to the very day I had started a thread about this crazily huge "Super Ultrawide" monitor, which led to a discussion about efficiency and productivity in relation to the number of monitors and resolutions and all that. The reason I even made that thread was because I had been considering changing my monitor situation.

Here's how I rolled for the past decade: 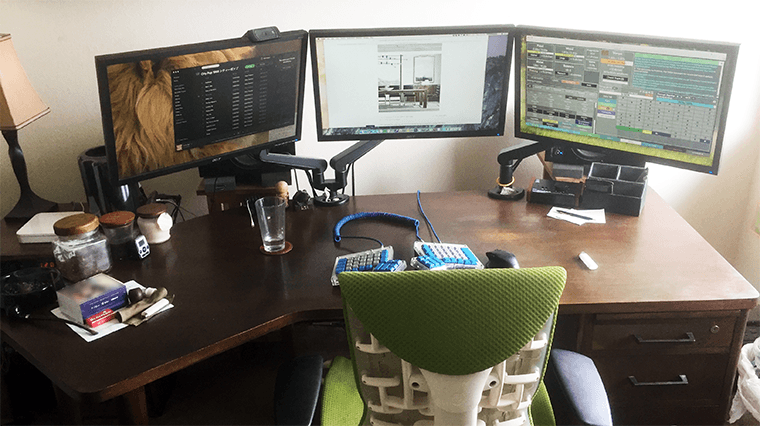 Those are 24" Acer widescreen monitors at 60 Hz refresh rate and 1920 x 1080p. I remember when I had one and bought 2 more with those monitor arms. I got a massive productivity boost and never thought about it again for like 8 years. Then monitor technology started changing.

The main two issues with having three of those is that I really didn't use the outer 2/3rds of the left and right screen due to how much pivoting you had to do in your chair and then you don't use the space on the center screen as effectively as you can becasue of the bezels. You get "boxed in" and can't quite fit two browsers at the proper width and can't have them halfway across to the next screen because they get cut in half. It was a nice boost in productivity but those problems were a hindrance too. Plus keeping them aligned and not crooked was annoying to me.

I saw what companies were doing with the Ultrawides (versus widescreen) and was excited but they started with around 27", 29" inch options at 1080p which meant they would be the same "pixels per inch" quality and not really offer me too much more room because those are diagonal measurements. That means the end result would be a wider screen that's less tall than the 24" widescreen. Time went by and they pushed out 34" ultrawides at 2460 x 1440p, which meant they'd be a tad taller than one 24" widescreen but have far more screen space due to the bump in resolution. Time went by more and finally there were 38" ultrawides at 3840 x 1600p with about 111 PPI. But that's 4k resolution with less height, but the 21:10 aspect ratio is how they film movies these days. It's "THE" resolution. More time went by and the prices dropped from around $1500 to $1000 and a couple more companies jumped in the game.

The funny thing is, the two other companies that joined LG in the 38" ultrawide world were using LG's panel. So really there was only one option at the end of the day, the LG 38UC99. I can't get a good picture due to how much backlighting I'm getting (I moved recently and don't have curtains up yet). 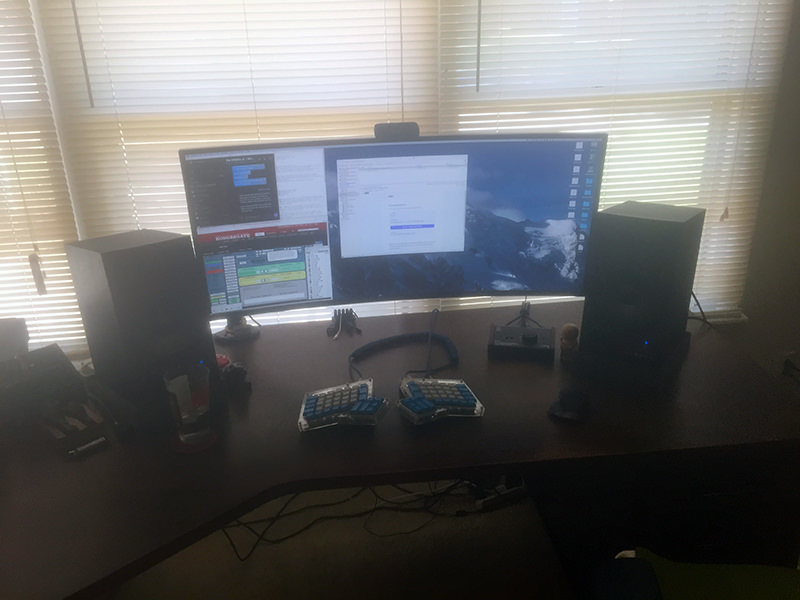 ​
There's some new panels coming out soon and NewEgg had a sale on the business model of the one I wanted (only difference is in the marketing and a longer warranty). So I managed to scoop one up at $800. This thing is huge.

I found this the other day, there's an error but it gets the point across: 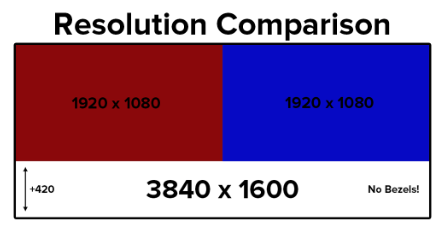 You can fit two of the monitors I had inside this big one, with +520 pixels extra in height. The key is there's no bezels too. 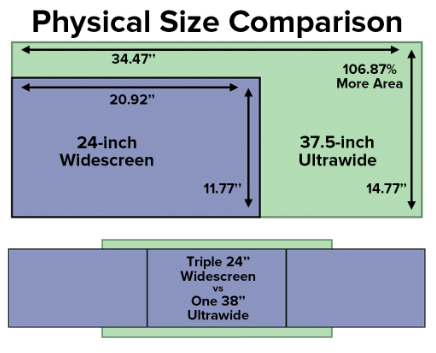 You can see how much bigger the screen is physically too, also compared to three.

What's killer with this is how crisp the images are at 111 PPI instead of the 92 PPI I was at. And these panels have improved so much since I purchased 10 years ago or so. The colors are vibrant, calibrated out of the box. So much brightness. Also the matte surface is nothing like they used to be, if you want no glare. It's as good as the non-matte versions.

Another tidbit for anyone on a Mac is I bought the software for around $2.99 called BetterSnapTool. It has the same features as every other option out there which I turned off to use the features that it offers that the others don't, where you can design your own "snap areas." It's 100% free of constraints, no grids or anything. So I created my own custom workspace now that stays completely consistent. Even if I scramble it all it takes about 5 seconds to snap all my windows back in place. I can't take a screen shot of it or I'd show how I set it up. It's super slick. It creates areas you can color and label however you want. You drag a window into that area, and then tell it where to snap to and how big the window should be.

I've had this for about two days and my productivity is literally through the roof.

Anyways, I had to share. My new office space is so huge and comfy. I have just at tiny bit of cable management to do that was waiting on me to get the monitor, and then I'm set up all the way. 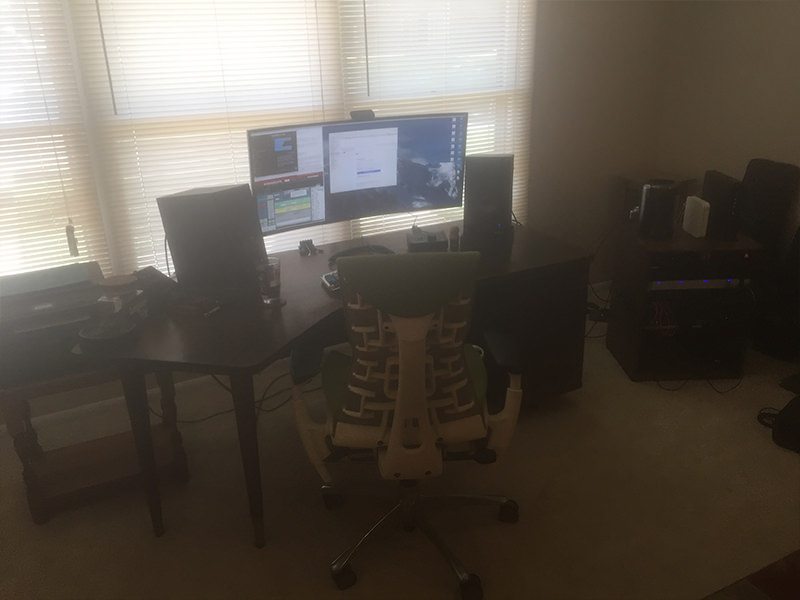 ​
TL;DR - One giant screen is better than three or two smaller separate ones, by far. 38 inches is the right size, anything bigger would be too big. At that size you can go 4k resolution. It's computer heaven.

Sweet upgrade! I made the swap to a 34" curved at 3440x1440 and it's been a gamechanger. Still, in the year and a half since I made the swap, it looks like the technology has just improved and improved. Your screen sounds absolutely sick and you paid $200 less than I did!

To add one note, for the fellow windows users out there I found WinSplit Revolution, which is now a paid tool, to be helpful as a window manager. Gotta have one when you're on a borderless landscape like this!
1% Theory, 99% Practice​

Good explanation! I bought the Samsung 49 and it sucked... can't seem to get away from triple 24's.

I just mocked this up for a friend to show them how I'm doing my window snapping currently. I think this will probably be the final way, it won't grow or change as far as I can tell.

​
So what we have here are the small boxes, called the Snap Areas, and big boxes called Window Areas. Each little box has a big box of the same color. The little box layout is just a smaller version of the big layout.

I set it up to where I hold Control when dragging a window and the little boxes appear. If I drag the window's tool bar anywhere into the little boxes, it will snap into the big box area and fill it out.

So I have it split almost into thirds, but the Center is a bit wider than the Left & Right areas. Then the left area usually has under the main big window some areas for Skype / iChat / Slack, whatever is needed at the time. I have a text file I use for notes next to it, and under that is a half-tall region where I can keep other browsers open or Youtube or whatever. So the left side is either a full height browser or 3 other apps, depending on what I'm doing and how many browsers I need.

What's cool is that's how it's actually color coded too. You can change the font, size, color, everything of each snap area. Pretty cool. That's with BetterSnapTool.

Combine that with me matching Mac's hot corners to buttons on my mouse and I'm flying to the desktop, other windows, etc. Dragging and dropping temp files to the desktop and accessing them, etc.

This makes me wonder what the future of computer screens will be. 21:9 is the perfect aspect ratio, and you can't get much bigger. I'd like to see more resolution crammed in with actually increasing the digital resolution. Just being able to display more pixels somehow, like smart phones do with their retina screens.

I'm guessing the next step is organic LEDs with the flexible screens. Eventually we'll be rolling our screens up and folding them to take them with us. Past that I'm guessing we'll be able to paint OLED's on walls and they'll light up with wireless electricity and we'll have any size or shape monitors we want, though we'll have to stick with pre-designed resolutions for GPUs and software displaying.

How do you make the most of a 34 inch ultrawide screen?

I got one of those now and I am unsure on how you're supposed to work with them.

Here's my basic setup, since I couldn't get BetterSnapTool to dance like @Ryuzaki was able to.

Hardware Foundations
On a Mac. I use a magic keyboard and magic trackpad.

Software
I use BetterSnapTool on MacOS.

80% of the time, I use the thirds setup. On a 34 inch screen, a third is sufficient for a browser to load all the info I need.

The remaining 20%, where I have two windows instead of three, is for Excel, SERPWoo and other apps which like a minimum screen width.

Background Apps
For messenger apps, spotify / music, notes, and other apps, I use a second virtual desktop, one that I can 3-finger swipe on my Magic Trackpad.

I bought a 35" ultrawide, but went back to iMac + 2x 24" (one vertical, one landscape), and put the ultrawide in my wife's WFH office. I like to split it across different screens more: 1 for analytics, iMac 27" for current work, and one for terminal/communication/notes.
You must log in or register to reply here.