The Engineer said:
Thank you for explaining how the price of $2500 came to be and helping me understand that you two were talking about separate payments.
Click to expand...

We're not talking about 2 separate payments.

However, when I followed up with him on July 1st to release the remaining amount which was 2200 + paypal fees = $2331, I ensured that he would add social signals to which he charged an additional $169 which put the total amount to $2500. 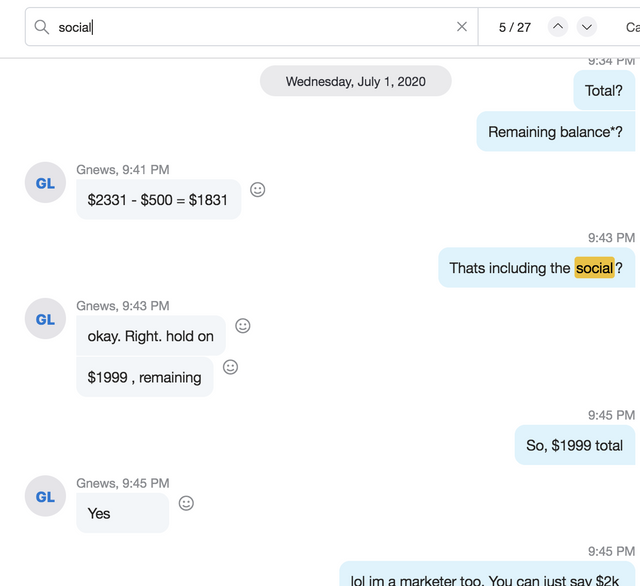 Here's my understanding:
The "Domi'matrix Package" which later became "King of the Jungle Package": 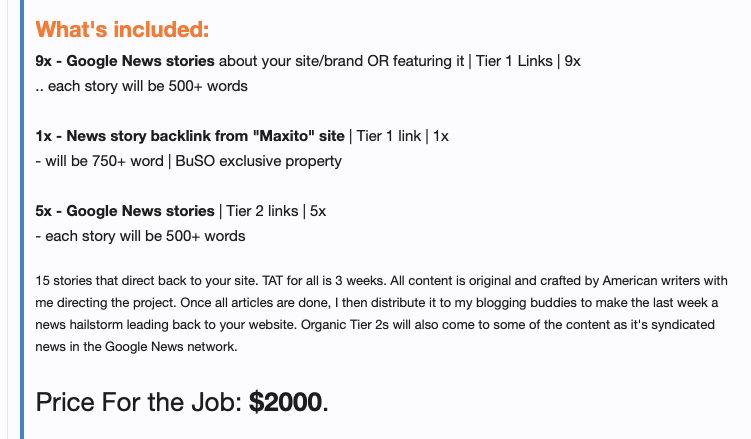 Neither of you seems to fully understand what the money was in exchange for.

Since both of you have plenty of existing positive transactions and this is both of your first negatives as far as have been made public, I think both of you deserve the benefit of a doubt. All of this confusion seems to be arising from nothing more than miscommunication.

What can we do to make this right?

What does @CashCowAdv feel he's missing from what he understands he paid for?

What does @EyesExist feel he's delivered and does that value add up to $2500 based on the actual prices, not any "intrinsic value" stuff.

This is what matters at this point. Please resolve it without a heated exchange. Work together towards a positive resolution. My understanding is both of you are trusted users of the marketplace, so let's chalk it up to miscommunication and figure out where you guys can meet in the middle and shake hands on a deal done well enough.
"It's easy to whine. That's why losers like it. It requires more effort to take it upon one's self to turn all that negative bullshit off, and instead be part of the solution. Evolve... or get out of the way." ~ turbin3

Purchased a tech post that EyeExist notified me about. I had an optimized article ready and opted to use that as apposed to his method of news (still really solid). For my purposes I just wanted to test if leveraging these as Guest Posts would do the trick and they did.

That post now sits at 6th for the keyword targeted and will likely rise as G figures out that it's the best for that phrase.

Purchased a 3 Bronze, Silver, & Gold Google News Backlinks from @EyesExist and was given a free upgrade to the next tier.

These were used for 2 clients and they have stricter internal requirements than the other clients I do SEO for. This means that these links not only have to move the needle, but they need to have social engagement, look better than a standard wordpress installation, and the content also couldn't be promotional and had to be subtle (traffic leak style).

The links were exactly that (after a few adjustments like tone of the content). The placements were niche relevant (not sub-niche relevant but good for the price point), the sites pass the clients internal teams inspection, and it moved the needle on the keyword + it's keyword cluster.

The only downside was that it took a long time for the order to be delivered, but it was also during the time @EyesExist got into a car accident.

I'd recommend this service if you know what you're doing as it will move the needle and I would purchase again from him.
Last edited: Sep 22, 2020
Every beginning is difficult. Getting started is easy. Perseverance is an art.​

EyesExist provided an updated excel sheet with 13-15 links. He's about to finish the last links tomorrow. For 2.5k, I wouldn't say the quality of the links were worth the money.

Since you guys have taken care of the core issue, which is whether or not the proper amount of links were delivered (with one more to be delivered ASAP), and are now just bickering, let's consider this matter resolved. I'm going to remove the recent off-topic posts that have nothing to do with this service or the core issue at hand.

I've set it up so that the unrelated arguing can't continue here. And honestly, it's not interesting or of value to the either of you or the rest of us, so please don't reignite the flame in other threads. Thank you two for sorting out the original problem.

For further information, please consult my post signature below.
"It's easy to whine. That's why losers like it. It requires more effort to take it upon one's self to turn all that negative bullshit off, and instead be part of the solution. Evolve... or get out of the way." ~ turbin3

No problem. But lets make the facts clear in my last post.

1) Links were provided in spreadsheet before, his skype messenger has problems

3) All links were delivered as of now. All posts are dated. Work was done on time.

4) All links wont show up on AHREFs b/c he bought Tier 2 links within package. Those links are pointed at other articles, not his site.

5) SERP results of second batch were tainted by his trying to 'reverse engineer,' my work for the client he purcahsed his for. Site dropped in rankings before i even finished my work. He wanted to learn what I do and it failed because bought spam links and duplicate links, trying to do things himself.

Both the first batch and second were over-delivered.
Articles that ranged in wordcount from 700-1000, American writers.
Thee average DA of the 14 links delivered in his 3rd purchase was about DA54
The biggest had an organic traffic of 600k per month


His complaints came after I chose to stop working for/with him. Now deleted comments explain his character.
​

After those links indexed, my webpages that targeted long-tail words IMMEDIATELY increased, meaning within a week. (Difficulty range:15 to 30 out of 100).

Many of my "Bronze" sites have grown into Silver status but I have new Bronze sites. I also have new Silver & Gold level sites as well.

SAVINGS: Notice I've adjusted/LOWERED some prices on the Diamond sites as I've become a stronger hand in some of the revenue streams of a few blogs. The discounts will last through November 15th as of now.

STUDY RESULTS:
Over 30 days since this Google News Article was posted with the upgrade of my 'social media signals work' (takes days to complete as the up-votes are natural) and it's permanently outranking some major pages in a very popular keyword phrase. It also has a Tier 2 link pointed (Bronze level GN site).

The highlighted post is a DA51 site that does only about 25k in traffic monthly but it's growing and has a strong history. The client didn't continue pointing more links to boost post further, as it's not their brand highlighted. But, the BACKLINK JUICE coming from such high ranked articles in popular topics (related to their niche); just great for ORM and Search Engine Ranking/Backlink Juice. - 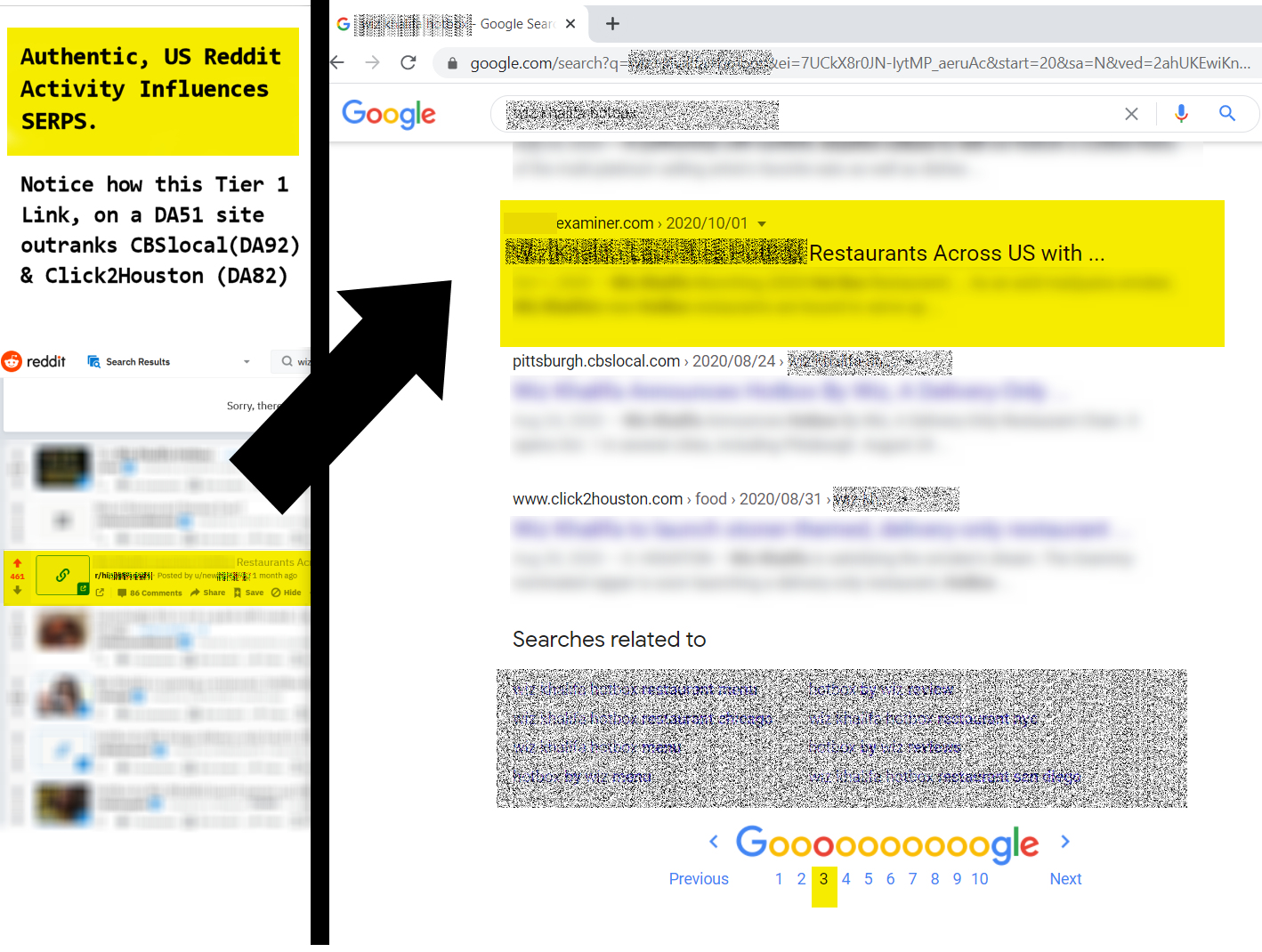 UPDATE/OFFER:
All content purchased this week will have a free 150 word upgrade.

Writers on my team are American college students/graduates with quality journalism skills.

I talk to myself but I don't reply to myself. I'm not crazy.
You must log in or register to reply here.