49% of Google Searches Result in No Click, Organic Clicks Outnumber Paid 12 to 1

So this company Jumpshot unleashed some data that says 49% of Google searches result in no click, an increase of 12% from the first quarter of 2016. The data breaks down like this (rounded):
When you only consider the 42% and 9%... so the 51% of searches that result in a click, 12% of those go to a Google-owned site.

Now think about crap like their rich snippets, travel and hotel and flights widgets, all that stuff is part of what's causing zero clicks, which is essentially, if I had to put a number on it, a "half-click on a Google-owned site."

The point being that not only have Google eroded the SERP traffic distribution down to 42% organic, but they've managed to capture most of the leftover to their own properties, ads, or widgets. And they have such a monopoly on search right now that they could drive that much, much further and still not hurt their revenues. When your brand name is a common verb, there's not much you can do to destroy your traffic at this point. 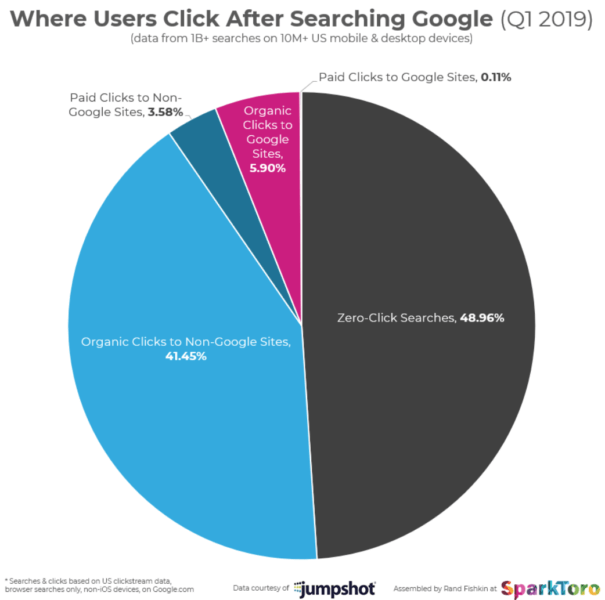 Other tidbits (Q1 2016 to Q1 2019):
This is my addition: this anti-trust investigation, their first in the USA, is well deserved. They've already been popped at least twice in the UK. You simply can't erode other people's ability to exist in the market, that's a fundamental principle of capitalism. We'll see how that plays out.
“Don't get sidetracked. If you do get sidetracked, get back on track as soon as possible. Ultimately sidetracking kills you.”​
You must log in or register to reply here.